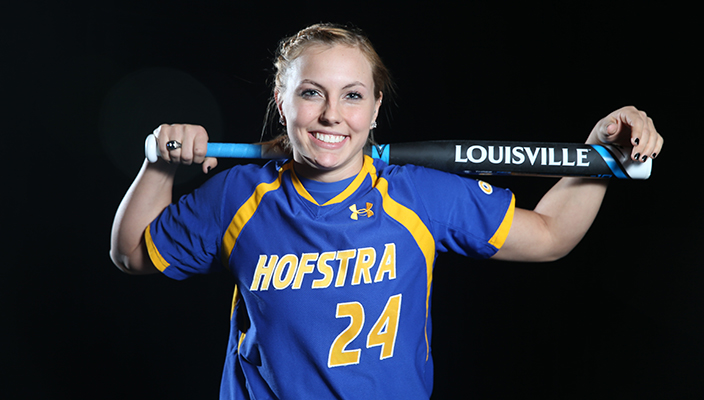 Traditions abound for a Hofstra Softball program that has made three consecutive NCAA Tournament appearances and 15 overall since 1993. All-America selections, all-league picks and other conference, regional and national awards have been hallmarks of the Pride’s success.
On a micro level, junior Caryn Bailey has continued another Hofstra custom: the high-producing centerfielder. After hitting 16 home runs through her first two seasons as the team’s everyday rightfielder, Bailey was asked to take over the position in center and has already hit three homers in 2015 to move within two of the program’s top-10 list as of March 30. Defensively, the move has required more pitch-to-pitch responsibilities. But Bailey’s .541 slugging percentage and 40 total bases show that the increased workload has not impacted her offensive prowess.

“It was tough at the beginning, I was getting a bad read on the ball but I know what I have to work on and the move has helped me learn about myself,” Bailey said.

Filling the centerfielder role required building on the lineage crafted by graduated senior Rachael Senatore, who was the Colonial Athletic Association leader in hits and hits-per-game in 2013. In 2012, Tessa Ziemba took over the centerfield spot for the injured Senatore and finished her career in the top-five of Hofstra’s all-time list in runs, hits and was second in RBIs and home runs.

Every primary Hofstra centerfielder since 2007 has made at least one All-CAA team, and Bailey will look to join the ranks of Erika Bernstein, Kris Root, Senatore and Ziemba on that impressive list. After committing just one error in starting 106 games from 2013-14 in right compared to four assists, Bailey has handled 39-of-40 chances this season. She has also supported the pitching staff in helping to align leftfielder Chloe Fitzgerald and freshman Brielle Pietrafesa, who has emerged as Bailey’s primary replacement in right.

“She’s getting great reads and has taken a lot of base hits away,” Hofstra Head Coach Larissa Anderson said. “She’s made some diving catches against UNCW. The aspect of her game I’ve liked the most is the communication. Every single pitch, she’s been communicating to both corner outfielders. That’s been a huge help to Pietrafesa, who is learning where she needs to play.”

Despite not even entering the midway point of her junior season, Bailey is already within striking distance of hollowed program all-time lists. Her 19 home runs is just two away from placing her in the top 10 and her 84 RBIs have her on pace to crack the century mark later this season.

After slugging .669 with 43 RBIs and a NFCA all-region selection as a freshman in 2013, Bailey wanted to set even loftier goals coming into the new campaign. Sitting in Anderson’s office at the exit interview following a 2014 season in which Bailey was a key member of a Hofstra team that qualified for the Norman Regional in Oklahoma, the challenge was set.

“I looked at Coach Anderson and said ‘I want to be an All-America,’” Bailey said. “We looked on ways to improve. I never look at anything I do as complete or good enough. I want to get this team a conference championship and all the way to the Women’s College World Series.”

Instead of hitting in a typical run-producing lineup spot, Bailey has found a home in the second spot behind the slap-hitting Fitzgerald, who used her brand of speed to win last season’s CAA batting title. Having two left-handed hitters to start the game has provided plenty of opportunities for the heart of the order. Fitzgerald (.388 on-base percentage) and Bailey (.429) have been key contributors in the team’s season-high eight-game winning streak as part of a 15-7-1 start.

Besides sharing an outfield and similar lineup positions, the bond formed by the two classmates has led to a solid rapport that is evident in the small gestures on the way from the on-deck circle to the plate.

“Before we go up to bat, we always shake each other’s hand and say ‘me and you.,’” Bailey said. “I know Chloe is going to get on base and it’s my job to help bring her in in any way possible. That could mean moving her over, a hit-and-run, or whatever the situation calls for it. If Chloe doesn’t get on base, then I have to embrace the role and get on base. We pick each other up.”

“It’s a tremendous asset to have her in that two-spot since she can drop a bunt or hit a long ball,” Anderson said. “Her versatility as a contact hitter who can also hit it out of the park gives us options.”

Senior pitchers Morgan Lashley and Taylor Pirone led a veteran staff and benefit from an outfield that has committed just a single error all season.

“Making the move to center has been an easy transition for her,” Pirone said. “It’s a huge lift to the pitchers because she gets such good read on balls in the gap. She’ll always lay out to make a play, and the pitchers love seeing that hustle an effort. It really pumps us up.

“Offensively, she’s a powerhouse. The ball comes off her bat faster than I’ve ever seen in all my years of playing. She lights a match for us in the lineup. She can get on base in different ways; she steal bases…she’s just an all-around great player.”

James C. Metzger Hall To Be Dedicated On April 7
Hofstra University Proudly Announces The Athletics Hall Of Fame Class Of 2015