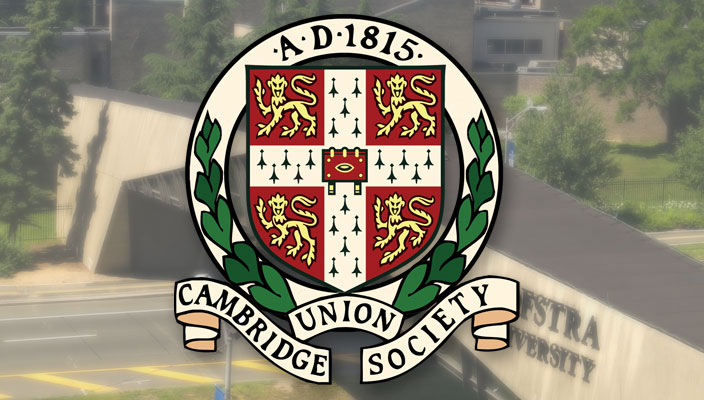 Hofstra University will be partnering with the Cambridge Union Society, the world’s oldest continually operating debate society, to host the second annual Cambridge – Hofstra Debate series, with two public debates.   The debates will feature teams of students from Cambridge Union Society and the Hofstra’s Debate Team. The debates will be held Wednesday April 1st and Thursday, April 2nd.

The debates will take place in The Helene Fortunoff Theater, Monroe Lecture Center, South Campus, and address the following topics:

Admission is free to both debates; Wednesday’s debate will also be broadcast live via webcast.

Videos from last year’s debates can be viewed on Hofstra’s livestream account.

In addition to the public debates, Cambridge Union Society officers will conduct debating workshops for Hofstra undergraduate students and groups of local high school students. The Cambridge Union Society, founded in 1815, is affiliated with the University of Cambridge in the United Kingdom. It is among the most distinguished debating societies in the world, with a mission of promoting free speech and participatory democracy, and training young people in the skills of public speaking and persuasive argument.  Over the course of its history, the Cambridge Union Society has hosted world leaders in politics, the arts, athletics and academia, including Prime Minister Winston Churchill, President Ronald Reagan, Nelson Mandela, Julian Assange and Clint Eastwood.

The Cambridge Union Debate Series at Hofstra University continues Hofstra’s tradition of promoting civic engagement and public discourse, including hosting presidential debates in 2008 and 2012. During the Fall 2013 semester, the university also launched a new Pride and Purpose Debate series, as well as a new internship and minor through the Center for Civic Engagement, in which students work on public advocacy and community organizing projects.