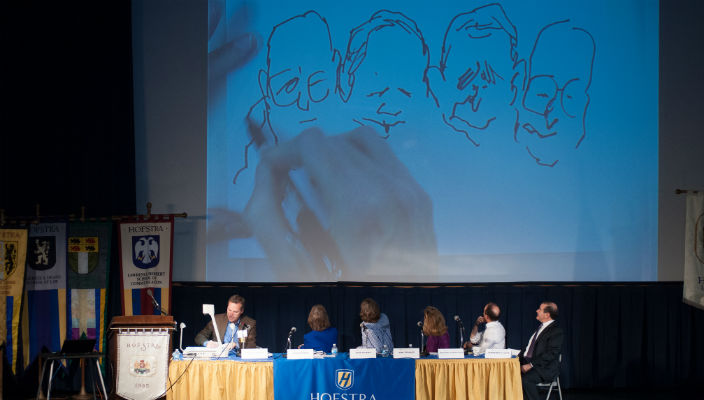 Almost a dozen sessions capped the third and final day of the Hofstra presidential conference examining George W. Bush’s two terms in office.  Panels today focused on the Bush Administration’s economic policy making, approach to Europe and the Middle East, and interrogation policies, as well as an analysis of his legislative leadership, among other topics.

A number of forums also examined the role of the media in the Bush Presidency, including a session  featuring political cartoonists Michael Luckovich of the Atlanta Journal-Constitution, Steve Breen of the San Diego Union-Tribune, Ann Telnaes of the Washington Post, and Mike Peters of the Dayton Daily News, who shared their drawings and reflected on how the Bush years provided years of material for their commentary, primarily because of the terrorist attacks of 9/11, the Iraq War, Hurricane Katrina, and the economic recession.

“We paid very close attention not only to the way that we sought to communicate to the public, but what the public wanted to communicate back to us both through satire as well as through serious discussion,” said Ronald I. Christie, Special Assistant to the President and Director of Policy and Initiatives and Intergovernmental Affairs from 2002 to 2004, in a panel examining White House communications in the George W. Bush era.

“For me, the major story on coverage of the Bush administration is, what I think many of us can agree, the stunning failure of the news media to provide a critical bulwark against the administration’s highly effective propaganda campaign to sell the war in Iraq,” said panelist and reporter Julie Mason, host of Sirius XM’s Press Pool.  “But it’s wrong to say that no one in the media asked questions at the time. The questions were asked; the answers were terrible.”

“I don’t think [GWB was] any of the things people accused him of being. I think it was a PR blunder, and it probably wasn’t his fault,” added Howard Dean, the former governor of Vermont and chair of the Democratic National Committee (2005 to 2009) and currently a senior presidential fellow at Hofstra’s Peter S. Kalikow Center for the Study of the American Presidency.   “The press has been a failing institution in this country for at least three presidencies…The news has become a profit center. The pressure in newsrooms is enormous. It’s not ‘get it right’ anymore, it’s ‘get it first’ and we’ll fix it later in subsequent editions.’”

That panel drew interest from students in varied majors including psychology, sociology, journalism, and political science.  “I chose this panel because it’s not something we know a lot about,” said Juliana Spano ’17, a rhetoric major with a concentration in political communication.  “I think it’s really interesting to see the issues they come across and how they organize such a complicated system.”

Closing plenaries on the administration’s economic policy-making as well as on the lasting presidential legacy of George W. Bush concluded Hofstra’s 12th presidential conference, which drew more than 150 scholars, former Bush and government officials, and journalists.

A number of panels from the conference are also available for viewing via livestream.

The conference, presented by Hofstra Cultural Center and the Peter S. Kalikow Center for the Study of the American Presidency in conjunction with the George W. Bush Presidential Library and Museum, marks the most comprehensive examination of the Bush administration since he left office in 2008.