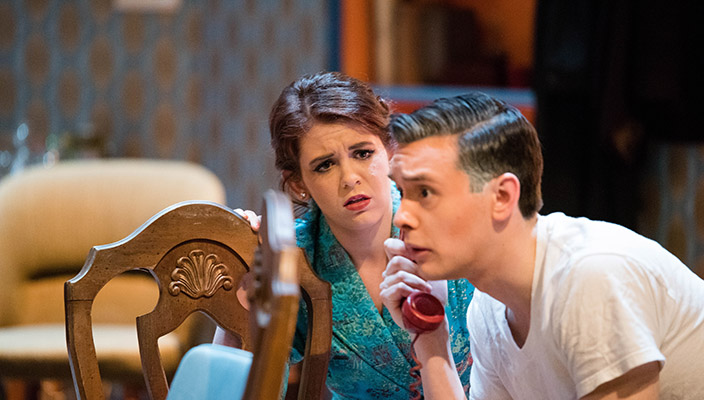 This is the final weekend to see Alan Ayckbourn’s comedy of misunderstandings, How the Other Half Loves, presented by the Department of Drama and Dance at the Black Box Theater (through March 29).

The design of the New York City-set play is remarkable. How the Other Half Loves was written by Ayckbourn to be performed in the round, as it is at the Black Box Theater.  Two living rooms and one dining room, in a separate New York City house and apartment are presented as one set, with two couples overlapping in the shared space.

Director and Professor of Drama James J. Kolb notes, “Comedy in Ayckbourn is often premised on something not quite normal. … The wife of one couple is having an affair with the husband of the other couple, and much confusion and comedy ensues. A third couple fall victims to the carrying-on of the other two couples, and elaborate fictions are created about their infidelity to hide the actual affair that is going on.”

Tickets are $10; $8 senior citizen (over 65) or matriculated non-Hofstra student with ID. Members of the Hofstra community may receive up to two free tickets upon presentation of a current HofstraCard. For tickets call the Hofstra Box Office at 516-463-6644 Monday-Friday, 11 a.m.-3:45 p.m. or purchase online at Hofstratickets.com. If available, tickets will also be sold at the door by cash or check only, starting 90 minutes prior to show time.