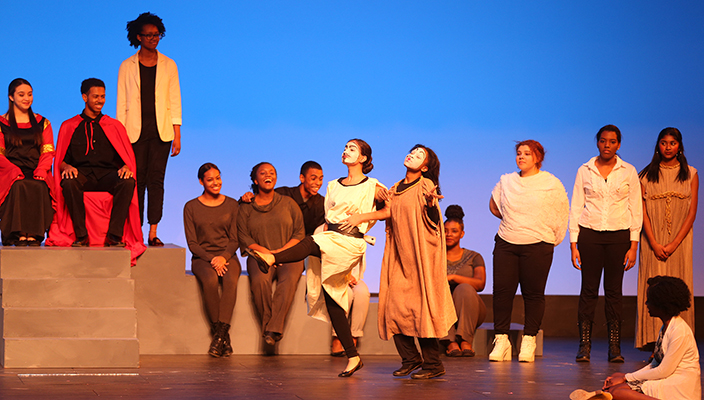 Students from eight local schools participated in the annual high school competition that Hofstra University’s Department of Drama and Dance  hosted as part of its 66th annual Shakespeare Festival. The annual competition is known for sparking students’ interest in Shakespeare and a love of performing. Native Long Islander and two-time Tony Award-winner Brian Dennehy performed in the high school competition as a teenager and has publicly credited it with igniting his love for acting.

This year’s competition took place on March 12 and 13, with four high schools participating each day. Students spent the first part of the day participating in workshops on stage combat, voice and speech and improv. Chair of Hofstra’s Department of Drama and Dance David Henderson says the day is a valuable experience for these aspiring actors. “They might think of pursuing drama but interacting with our students and faculty gives them real insight on what it is like to study theater on the college level.”

From 3-5 p.m. on both days the visiting students performed scenes from a Shakespearean play for a panel of faculty members from Hofstra’s Department of Drama and Dance. Staging, lighting, costumes, music and sound are part of the presentations. The Hofstra professors offer the students critique and advice and give awards for “Best Actor,” “Best Actress,” and “Best Ensemble.”

On Thursday, March 12, the participating schools were:

On Friday, March 13, the participating schools were:

Judging the scenes were Hofstra Professors Jean Dobie Giebel, James J. Kolb and Jennifer Hart. Dr. Kolb, who has directed seven of Hofstra Shakespeare Festivals, was very impressed by the high schoolers. “Often there’s one school that isn’t quite ready to match what the other schools are doing, but today it was different.” He then added, “I’ve been participating in the competition for more than 20 years, and today was the best set of performances.”

Top image: Students from Valley Stream Central High School perform a scene from Hamlet – when the King and Queen watch the actors perform in their court.

With reporting from Jean Pierre Guzhnay