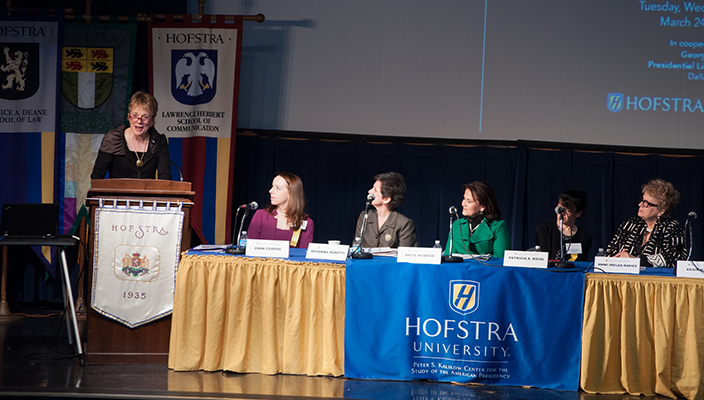 The second day of Hofstra’s presidential conference on the administration of George W. Bush kicked off with panels on such diverse topics as “International Negotiations and Strategies,” “Economic and Trade Policy,” and “The Leadership of First Lady Laura Bush.”

The latter panel (pictured above) examined the history and complex role of first ladies ranging from domestic obligations to political partnerships. Attorney Patricia A. Rossi presented her study on the former First Lady’s evolution from the “shy librarian” stereotype into an international activist, noting Mrs. Bush’s extensive travel and work in literacy, health and women’s rights.

Anita McBride, former chief of staff to Mrs. Bush, noted the ever-evolving role of first ladies and the freedom with which they can choose important issues to focus their efforts.

“Every single person puts their own stamp on it,” said McBride, currently executive-in-residence at American University’s Center for Congressional and Presidential Studies.

The late morning plenary session on “Politics and Policy Making in the George W. Bush Presidency” featured three former White House officials who reflected on their time in the administration and felt “privileged” to work for President Bush.

Wehner lamented, “We never on the communication side of things, in my estimation, were able to convey the George W. Bush we saw in private … as well as I wish we would have,” referring to the level of engagement and interest that they all saw in the president’s approach to his job.

When the panel was asked about Dick Cheney’s influence on domestic policy, Wehner answered, “He had a very different style of engagement than President Bush. My sense of it is that he just didn’t have the passion and energy on domestic policy that he did on international policy.”  Wehner echoed opinions also expressed on the first day of the conference that Cheney’s influence had diminished by Bush’s second term.  “He wasn’t as dominant a figure,” because by then the president had gotten his “sea legs” on international affairs.

Wehner, who also served as deputy director of speech-writing under President Bush, shared his opinion on President Bush’s most effective speeches, citing Bush’s 9/11 speech from the Episcopal National Cathedral, which he said was “beautifully crafted” and “gave voice to what the public was feeling at the time.” Wehner also noted President Bush’s address to a joint session of Congress and the nation following 9/11, and his 2001 speech on stem cell research which was “the president’s first major primetime address on a very complicated moral issue.”

Social Security, media and the presidency, the White House staff, and economics policy-making will also be addressed. On a lighter note, an 11:10 a.m. session on political cartoonists at the Student Center Theater will feature artists Steve Breen of the San Diego Union-Tribune, Michael Luckovich of the Atlanta Journal-Constitution, Mike Peters of the Dayton Daily News/King Features Syndicate/Mother Goose and Grimm, and Ann Telnaes of The Washington Post.

Those interested in viewing the panels that have already taken place and those scheduled for tomorrow should note that the plenary sessions and forums of the George W. Bush conference are available to watch over Livestream.

Check out the entire feed of #HofstraGWB posts here.