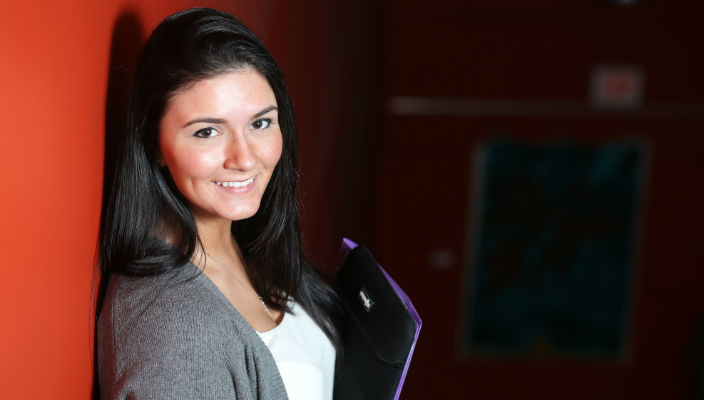 Marissa Espinoza, an economics, political science and psychology triple major who will graduate in May, has been awarded a Fulbright Study/Research Grant to conduct research on the economy in Ecuador. Marissa will leave for Ecuador in the fall and return home in late May 2016.

Marissa’s grant is from the Fulbright U.S. Student Program. She will represent the United States as a cultural ambassador, helping to enhance mutual understanding between Americans and the people in Ecuador.

“There has not been nearly enough research or focus on Ecuador, thus I saw an opportunity to contribute in a meaningful way to the economic literature by filling the void of research on Ecuador and its economy,” said Marissa, a Hofstra University Honors College student whose father is from Ecuador.

“I will build an index measuring the level of financialization in Ecuador, in order to develop a means of measuring when levels of growth in Ecuador are natural or artificial, thereby allowing an assessment of whether the growth poses a threat to the stability of their financial system,” she explained.

Marissa’s research will “translate into future policy work for graduate school and thereafter in my career,” she said.

Her interest in the Fulbright Program was piqued during an information session hosted by Dr. Neil H. Donahue, Assistant Provost for Undergraduate Research and Fellowships and Senior Associate Dean, Honors College. She began investigating appropriate locations for the two subjects in which she is most interested: financial systems and Latin America. She started brainstorming her project idea last April, spent the summer writing her drafts, and put the final application package together in early September.

During the process, she sought out Dr. Pedro Romero, an economist at La Universidad de San Francisco de Quito, an exceptional private liberal arts university in Ecuador, who specializes in the subject she wants to focus on. Dr. Romero wrote a letter of affiliation to the Fulbright Commission expressing his commitment to sponsor Marissa.

“The Fulbright Scholarship is very, very competitive and selective, with the most demanding application requirements of all such prestigious postgraduate scholarships, because of the research project proposal, which needs to be anchored in detail in the resources of the chosen country,” said Dr. Donahue.

Indeed, the Fulbright U.S. Student Program only awards eight Study/Research Grants to Ecuador, and upwards of 70 applicants apply to that country each year.

“Marissa has a family connection to Ecuador and is a great student and wonderful person in general, but none of those factors is sufficient. What carried her through to the award is her commitment to research, and the depth of specific detail about her project and how she made the case for the short- and long-term value of her research for her own career and for international relations between the U.S. and Ecuador and Latin America in general,” Dr. Donahue said.

Marissa joins the ranks of more than 100,000 Fulbright U.S. Student Program alumni who have undertaken grants in more than 140 countries since the program began in 1948. In addition to conducting her research, she plans to take a few economic and banking courses, as well as a Spanish course, while she’s in Ecuador.

“I am very grateful, as I know … there are many qualified finalists,” Marissa said. “I cannot wait to head to Ecuador and begin my project. I’m forever indebted to the team of professors here at Hofstra — Dean Donahue, Professor Dudek, Professor Krause, Professor Bose, Professor Herold, Professor Himelfarb and Professor Zapata — who helped me make the decision and mentored me throughout the very lengthy application process.”