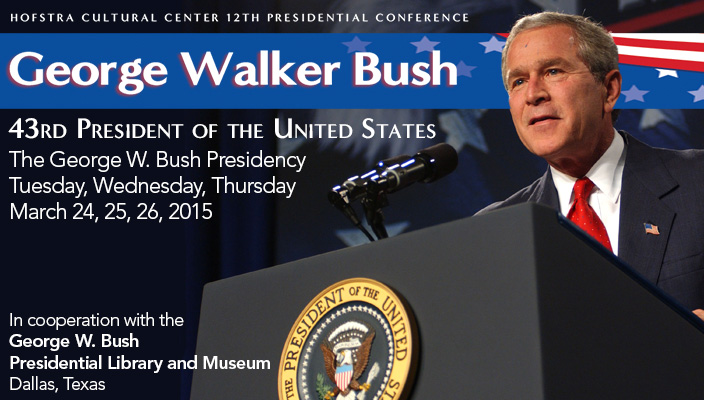 The conference on the 43rd president, presented by Hofstra Cultural Center and the Peter S. Kalikow Center for the Study of the American Presidency in conjunction with the George W. Bush Presidential Library and Museum, marks the most comprehensive examination of the Bush administration since he left office in 2008.

STUDENTS INTERESTED IN SERVING AS VOLUNTEER GUIDES AT THE GEORGE W. BUSH PRESIDENTIAL CONFERENCE MUST APPLY HERE BY MARCH 1, 2015

The event continues Hofstra’s long and distinguished tradition of hosting conferences on the administrations of every U.S. president since the university’s founding in 1935, from Franklin Delano Roosevelt forward. The University has published articles and commentary from every conference, which have become standard scholarly volumes and early oral histories of each presidency.

“Hofstra’s presidential conferences are extraordinary gatherings that bring together the leaders who helped shape an administration with the journalists who covered it and the scholars who will help assess its impact and legacy,” said Hofstra University President Stuart Rabinowitz. “It is our honor and privilege to play a role in these initial evaluations of presidential history. Just as important is the opportunity it provides to our students, our faculty and the greater community, to meet and learn from those who have had a hand in making that history.”

In the 10 years since Hofstra last hosted a presidential conference, on the administration of William Jefferson Clinton, the University has built a reputation as a locus for research and scholarship on the nation’s highest office. In 2006, Hofstra established the Kalikow Center for the Study of the American Presidency, and the Peter S. Kalikow Chair in Presidential Studies, which was followed by hosting two consecutive presidential debates in 2008 and 2012.

During the George W. Bush conference, more than 50 scholarly papers from several disciplines, including political science, communication and history, will be presented at dozens of panels and forums examining topics such as education, economic policy, homeland security, interrogation polices and White House communication strategies.

“Hofstra’s twelfth presidential conference will address key topics about leadership, politics, and policy making in the George W. Bush Presidency,” said Conference Director Dr. Meena Bose, PhD, professor of political science and director of the Peter S. Kalikow Center for the Study of the American Presidency. “ It will include scholarly paper presentations and forum discussions on such diverse topics as the Bush Doctrine and Combating Terrorism, Faith in the George W. Bush Presidency, the Leadership of First Lady Laura Bush, National Security and International Law, Recollections of 9/11 First Responders, Economic Policy, and more. The conference papers and proceedings will be of great interest to students, faculty, and the community, and will contribute significantly to the historical record of the Bush 43 administration.”

Other invited speakers include:

“The George W. Bush Conference will include commentary and analysis from a wide range of perspectives,” said Conference Co-Director Dr. Richard Himelfarb, PhD, associate professor of political science. “Scholars, journalists and administration officials, both supporters and critics, will receive a fair and respectful hearing at this event.”

All events related to the conference are free for pre-registered Hofstra students, faculty, staff and retirees with a current Hofstra ID card.  Information about registration, fees and the full conference schedule is available at the hofstra.edu/gwb

The official conference hashtag is #hofstragwb.

Hofstra Cultural Center is an internationally renowned organization that includes a conference and symposium component, performance arts, and the publication of the proceedings of its conferences and symposia. Its goal is to develop educational programs related to the cultural and interdisciplinary experience of students, faculty, staff, alumni and scholars. It has sponsored more than 130 conferences/symposia, including the Presidential Conferences.

Hofstra University is nationally ranked and recognized private university in Hempstead, N.Y. that is one of only two universities chosen to host consecutive presidential debates (2008 and 2012). At Hofstra, students get the best of both worlds. Our campus, with its ivy-covered buildings and lush green quads, is 25 miles from New York City and all its cultural, recreational and professional opportunities. We offer small classes and personal attention, with the resources, technology and facilities of a large university, including the Maurice A. Deane School of Law and the Hofstra North Shore-LIJ School of Medicine. Hofstra University is a dynamic community of more than 11,000 students from around the world who are dedicated to civic engagement, academic excellence and becoming leaders in their communities and their careers.

*Conference panels and forums, as well as participants, may be adjusted based on speaker availability.