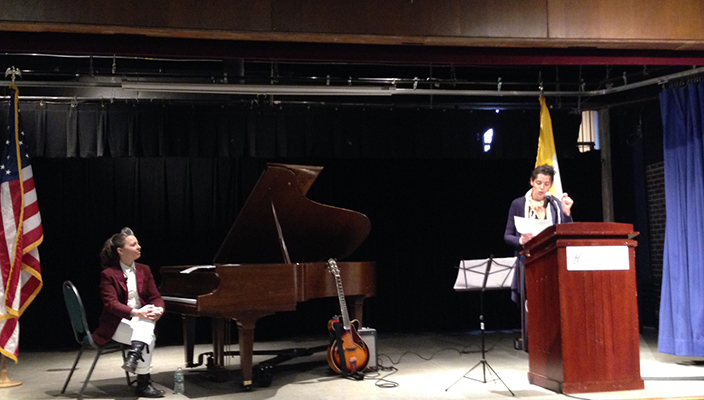 Pulitzer Prize-winning playwright Quiara Alegría Hudes performed songs from a new musical, tentatively titled Miss You Like Hell, with her collaborator and accompanist Erin McKeown while she was on campus today as part of the Great Writers, Great Readings Series.

Hudes, who wrote the book for the Tony Award-winning Broadway musical In the Heights and won the 2012 Pulitzer for her play Water by the Spoonful, also read an excerpt from one of her early plays, Yemaya’s Belly.

Miss You Like Hell, commissioned by the La Jolla Playhouse in California, is based on Hudes’ play 26 Miles, about a mother’s cross-country drive with her teenage daughter. Hudes said she and McKeown have already written 22 songs for Miss You Like Hell. They plan to continue work-shopping the show and are about a year away from staging it.

“Each song has its own writing process,” Hudes explained to the audience, giving a sneak peek into the creative work that goes into developing the lyrics and book for a musical.

The next Great Writers, Great Readings event will take place on Wednesday, April 22, at 7 p.m. with poet and children’s author Elizabeth Spires. For more information call 516-463-5410.