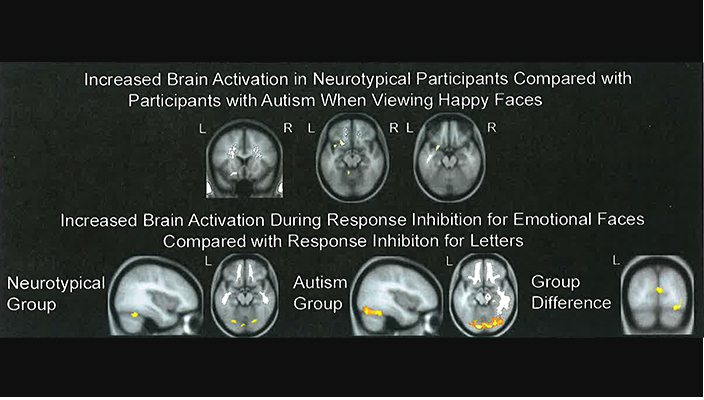 New research published by scholars from Hofstra University and North Shore-LIJ Health System may explain why individuals with autism have problems with social interactions and particular difficulty recognizing and responding to social and emotional information. The findings, published in the journal Progress in Neuropsychopharmacology & Biological Psychiatry, show that when individuals with autism view images of happy faces, there is reduced activity in brain regions normally responsible for reward and motivation.

The researchers also report that when individuals with autism were shown images and asked to distinguish between happy and fearful faces, there was increased activity in a brain region that is normally responsible for basic perceptual recognition of faces. In other words, they must work harder to evaluate the emotion behind an expression.

This is the first study in autism research to compare brain activity when people view and make decisions about emotional facial expressions with the brain activity they experience when viewing non-social/emotional images such as a number or letter of the alphabet.

“Brain regions that are normally engaged to give us pleasure when we see a happy face are not working correctly in autism. This may explain why individuals with autism are not motivated to seek out social contact,” says first author Dr. Keith Shafritz, associate professor and chair of psychology at Hofstra University. “In addition, the frustration that individuals with autism experience during social situations may in part stem from the difficulty they have distinguishing between different emotional expressions.”

This study has implications for the developments of effective treatments for autism, if behavioral therapies or drug therapies can specifically target the brain regions found in this study to be altered in autism – the ventral striatum and nucleus accumbens and the fusiform gyrus.

Autism is characterized by deficits in social interactions and communication skills, and the appearance of restricted, repetitive, and stereotyped behavior patterns.  This study used functional magnetic resonance imaging (fMRI) to determine brain regions that are active during a cognitive task in individuals with autism and individuals without autism. Images were projected onto a small screen placed above their heads. A group of 38 adolescents and young adults – 20 with autism, and 18 without – participated in the study, which was ongoing from 2010-2014. The participants ranged in age from 12-23.

In one part of the task, researchers showed the participants pictures of faces and asked participants to press a response button for all faces they saw.  In those conditions, all faces shown to the participants depicted one specific emotion.  The researchers found that when participants with autism viewed happy faces, they did not have activity in the ventral striatum and nucleus accumbens, regions deep in the brain that are associated with reward, motivation and learning.  These regions were active when individuals without autism viewed happy faces.

In a second part of the task, the researchers showed participants both happy and fearful faces, and asked the participants to press a response button only when they saw faces depicting one of those two emotions.  Participants had to decide whether they were viewing a happy or fearful face and respond accordingly.  Both groups experienced increased activity in the fusiform gyrus. Dr. Shafritz explains, “This is the region of the brain, found at the bottom of the temporal lobes, believed to play a major role in the expertise related to facial recognition in typically-developing individuals.” However, participants with autism showed significantly more activity than the others. In fact, those participants with autism who had the most difficulty with this part of the task showed the largest increase of activity in the fusiform gyrus.

While in the MRI, the participants were also shown individual images of English letters and were asked to press a button for all letters, or withhold responses for the letter ‘X’.  The participants with autism did not have difficulty altering their responses during this part of the task.

Other authors on the study included Philip Szeszko from Zucker Hillside Hospital, Joel Bregman from the Center for Autism in Philadelphia, and Toshikazu Ikuta from the University of Mississippi.