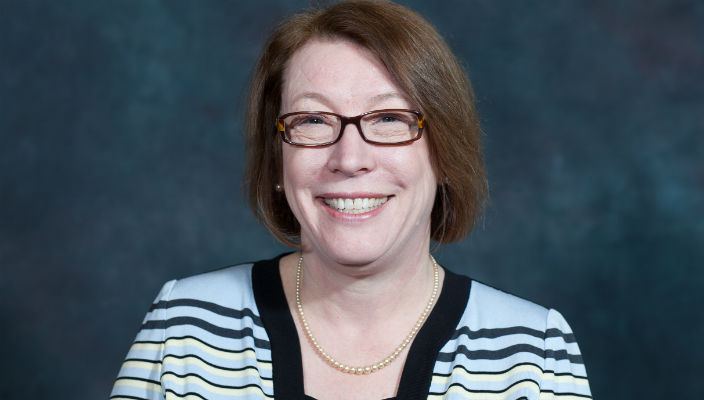 A scientist who is the chief academic officer at Manhattanville College has been appointed Hofstra University’s Provost and Senior Vice President of Academic Affairs – the first woman to hold the position, President Stuart Rabinowitz announced this week.

Dr. Gail M. Simmons, PhD, who currently serves as the provost and vice president for academic affairs, and professor of biology at Manhattanville, will begin her new position at Hofstra in July.

“In Dr. Simmons we have found an academic leader who is both creative and collaborative, who understands the challenges and opportunities in higher education and who has successfully worked with faculty, staff and students to find solutions at the academic institutions she has led,” President Rabinowitz said.

She will succeed Dr. Herman Berliner, PhD, who will retire at the end of this semester after 24 years as provost and 44 years at Hofstra.

“It is a great honor to become Hofstra’s next provost, and I look forward to many years of working to bring the university to new heights,” Dr. Simmons said. “I am thrilled to be joining the Hofstra Pride.”

Simmons has been at Manhattanville, a private college of about 2,700 students in Purchase, N.Y., since 2010. During her tenure there, she led the development of the college’s strategic plan as well the creation of the School of Arts and Sciences.  She worked across the college to make significant improvements in student retention and supported expansion of graduate programs in business, education, and creative writing.

Immediately prior to her appointment at Manhattanville, Dr. Simmons served as the Dean of the Division of Science and Technology at the College of Staten Island of the City University of New York (CUNY) where she supported increased faculty diversity and faculty success in the sciences and technology; led a team that brought nearly $1 million in federal funding to support student success in STEM disciplines; and advocated for civic-engagement and active-learning approaches to science education through the NSF-sponsored SENCER program as a SENCER leadership fellow.  Other positions Dr. Simmons has held include founding Dean, School of Science at The College of New Jersey and Associate Dean, Division of Science at The City College of CUNY, where she began as a member of the faculty.

Dr. Jean-Paul Rodrigue on US Port Expansion for Ships from Expanded Panama Canal
Drama Alum Recalls His Days at Hofstra