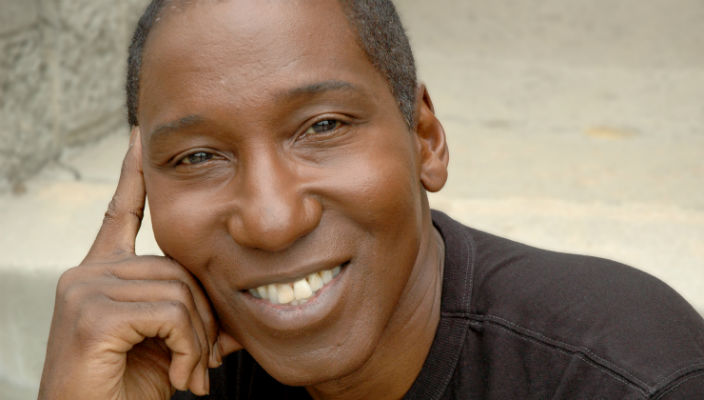 Mel Johnson, Jr. (BA, ’71) has just wrapped up a successful run of The Road to Damascus, an Off-Broadway play in which he played the first black African Pope. Fans of Johnson will recall his role as Benny, the mutant cabdriver who starred opposite Arnold Schwarzenegger in 1990’s hit sci-fi film Total Recall.

“The wonderful thing about [The Road to Damascus] is it’s a new piece, so we [had] the playwright with us almost every day,” enabling the cast to change the script as they rehearsed, Johnson said. “That’s always very exciting.”

The play, which ran Jan. 17 through March 1 at New York’s 59E59 Theaters, received critical acclaim from The New York Times, calling it “a serious and satisfying political thriller”; TheaterMania, which deemed it “wonderfully imaginative – it will keep you on the edge of your seat!”; and Indie Theater Now, which shouted, “A marvel! The script really sings!”

And TheaterMania had this to say about Johnson: “Mel Johnson, Jr. is charismatic and compelling.”

In The Road to Damascus, America is under threat as full-scale civil war rages in Syria. A bomb has exploded in Manhattan and nuclear war is looming. Johnson’s peace-seeking Pope Augustine is at a crossroads: Will he intervene directly in American foreign policy in Syria, or will he accede to the demands of Washington?

It was the first time Johnson played a Pope, which he said was exciting, but “everything is new each time you start on a new project,” he added. “Nothing is the same. Even when you’re doing the same play – it’s never the same.”

Johnson has acted across all genres since his days at Hofstra. Aside from his well-known role in Total Recall, Johnson’s TV credits include ABC’s “The Practice,” UPN’s “Star Trek: Deep Space Nine,” FOX’s “New York Undercover” and CBS’s “The Fresh Prince of Bel-Air,” among several other small-screen stints.

For the past five years, in between gigs, Johnson stars in a one-man show called Frederick Douglass: In the Shadow of Slavery. The play, which is about the most important African American activist in U.S. history, is performed at various venues across the country.

Johnson was born and raised in New York City and attended the High School of Performing Arts. When it was time for college, he wanted a traditional campus atmosphere but wanted to be close to the city.

“That was one of the big perks [about Hofstra] because they had several professors who were working on Broadway at the time,” Johnson said. “When [professor] Joe Leon was doing a show on Broadway, he would bring his students and would arrange for us to come see his show from backstage. He did a show called Jimmy Shine starring Dustin Hoffman, and we were able to go see that show five students at a time and then go meet with Dustin Hoffman after.”

During his four years as a theater major in Hofstra’s Department of Drama and Dance, Johnson performed in many productions, “but Carol Sica was the teacher who directed this fantastic production of The Imaginary Invalid, which I was fortunate enough to play the lead in. … The production values of the university’s drama department were hard to beat. Some of the productions we did matched regional theater productions in the nation as far as quality is concerned. So we got a real foot up on the outside world. I felt very prepared when I left Hofstra for what was ahead of me.”

So, what advice does Johnson have for aspiring actors? “Continue to study. You’ve got to keep that engine fluid. This is your instrument. This is your body. This is what you do. It cannot sit idle. Take classes until you’re working constantly. The best kind of class is doing work, but you’ve got to hone those things until you continue to work,” he said.

“No matter how old you are, you are constantly auditioning,” he added. “You’ve got to persevere, find a way of supporting yourself that supports your career, and really be accurate about your ability and your progress. Don’t beat yourself up, but don’t [think it’s OK to have ] not worked in five years. You’ve got to be real.”