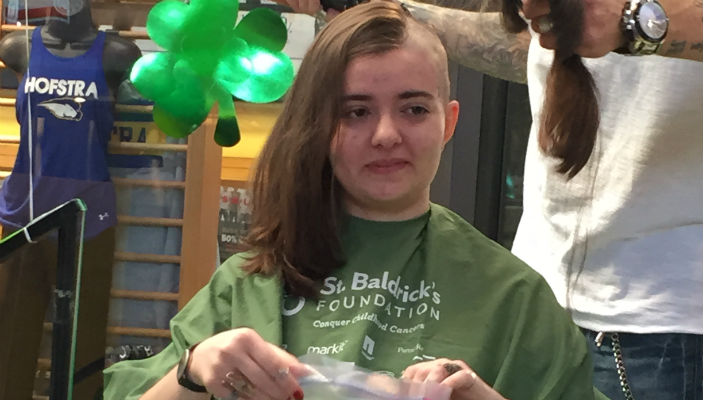 The Sondra and David S. Mack Student Center Atrium was abuzz during common hour today, as students, faculty and staff filed in to get their heads shaved at Hofstra’s seventh annual St. Baldrick’s Day fundraiser. As of Wednesday afternoon, the Hofstra community had raised nearly $37,000 for children’s cancer research and still counting. That tops last year’s fundraising record of $34,800.

Participants gathered not only to raise funds for a good cause but also to honor the memory of former Dean of Students Pete Libman, who died last fall after a long battle with pancreatic cancer.

“Pete Libman is the reason this event has become so successful,” said master of ceremonies Tom Kostiw ’10, who, with his roller hockey teammates, launched St. Baldrick’s Day at Hofstra seven years ago. “He latched onto us six years ago and wanted to help us make this event grow. He had a vision for us where each year we’d get bigger and bigger — he really did so much to help us get to where we are today. We want to remember him now and always.”

Toward that end, Kostiw initiated the inaugural “Pete Libman Pride Award,” which goes to the top individual fundraiser. This year’s award went to Joy Brigis — a friend of a student in the Hofstra North Shore-LIJ School of Medicine — who raised $2,580. Dean Libman’s wife, Evelin, and two of his four children, Milena and Jayden, were at the event and took the stage as the award was announced.

“I’m thrilled that Pete Libman’s legacy lives on,” said Dean of Students and Assistant Vice President Sofia B. Pertuz. “It’s clear that he was passionate about the students and this event, so I’m really happy to be here to support it and be a part of it.”

Forty-one students from the Hofstra North Shore-LIJ School of Medicine at Hofstra University participated, as well as Dr. Joel Stern, Assistant Professor of Science Education, and Annalise Ellis, the medical school’s director of academic affairs and registrar. Dr. Stern has participated for the past two years “to support the medical school students and to let cancer patients know they have allies in the fight against cancer.”

Some of the women who participated donated their locks to Children With Hair Loss, a nonprofit organization that makes wigs for children who have suffered hair loss as a result of various medical-related afflictions. Two, including Loulou Katz, 21, fully shaved their heads. Katz said she was inspired by the memory of her cousin, who died in 2004 of leukemia at the age of 12.

She raised $160 and donated her hair to Children with Hair Loss. “I figured I might as well go all in,” Katz said.  “It’s going to take a day or two to get used to it, but I’m happy with my decision.”

Kostiw and former and present Hofstra roller hockey team members hosted a silent auction this year, auctioning off an NHL hockey stick that was signed by the entire New York Islanders team roster. The winning bid of $510 went to Hofstra alum and former roller hockey player Matt Ketcham’s mother. Ketcham earned the “Knight of the Bald Table” honor, which is issued by the St. Baldrick’s Foundation to seven-year participants. Kostiw received this honor last year; this was his eighth year participating.

Of the 116 participants who signed up to raise money, the top three individual fundraisers, respectively, were Brigis, Kostiw ($1,315.00) and Associate Director of Public Relations Colin P. Sullivan, who raised $1,285. Sullivan also earned the “Squire of Hope” award given to those who have participated at least three years.

Seven teams registered to raise money for this worthy cause. The top three were the Hofstra North Shore-LIJ School of Medicine at Hofstra University ($25,596.73), Hofstra Roller Hockey ($3,115) and Pete’s Pride – In Memory of Peter J. Libman ($3,020).