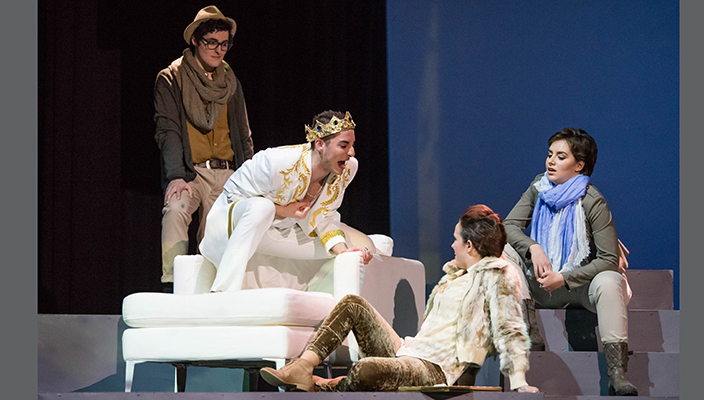 Richard II, the headline production of Hofstra University’s 66th Annual Shakespeare Festival is being presented as a multimedia parable about the corrupting power of fame at the John Cranford Adams Playhouse. The story is one of personal and political transformation, told through the fall of Richard II and the rise of his cousin, Henry of Bullingbrooke, better known as Henry IV. This is the first time in the Festival’s history that Richard II has been performed on the Hofstra stage.

Remaining show times are Friday, March 13 at 8 p.m.; Saturday, March 14 at 8 p.m.; and Sunday, March 15 at 2 p.m. Tickets are $12, $10 for senior citizens and matriculated non-Hofstra students with ID. Members of the Hofstra community may receive up to two free tickets upon presentation of a current HofstraCard. Tickets are available at the Hofstra Box Office, Monday-Friday, 11 a.m.-3:45 p.m., at 516-463-6644. Tickets will also be sold at the door by cash or check only; the Box Office opens 90 minutes prior to show time.

This week, the festival also includes the companion play is What Fools! This one-hour version of Midsummer Night’s Dream has been reimagined to take place in the world of vaudeville.  It is an excellent introduction to Shakespearean theater for young people.

What Fools! will be performed on Thursday, March 12, at 8 p.m. On Saturday, March 14, at 2 p.m. it will be performed again as a double feature with the Hofstra Collegium Musicum concert, The Earl of Essex, His Last Good-night. This program of madrigals, lute songs, and instrumental works is inspired by the tempestuous relationship between the Earl of Essex, Robert Devereux, and Queen Elizabeth I. The concert features works by John Dowland, Daniel Bacheler, Richard Martin, and other Elizabethan composers.

The location for What Fools! and The Earl of Essex, His Last Good-night is The Helene Fortunoff Theater in Monroe Lecture Center, South Campus.  Tickets are $6. Members of the Hofstra community receive up to two free tickets upon presentation of a current HofstraCard on both March 12 and 14.