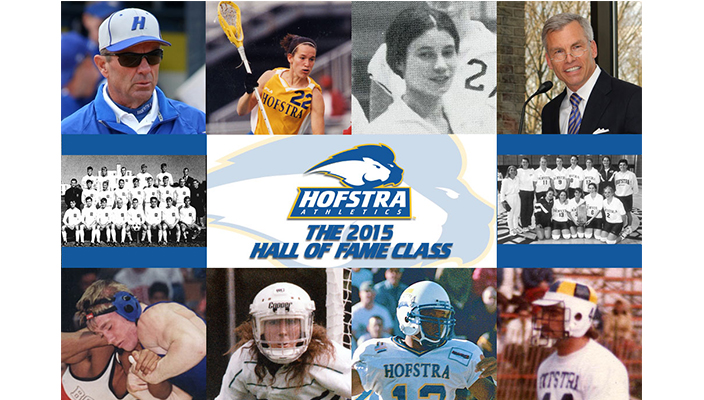 Hofstra University Vice President and Director of Athletics Jeffrey A. Hathaway today announced a special Hofstra Athletics Hall of Fame Class of 2015, which will feature two separate ceremonies, including the induction of eight individuals and four teams.

The first of the two ceremonies will take place at 2 p.m. on Sunday, April 12, 2015, at the University Club on Hofstra’s north campus and will feature the eight individuals and two of the teams.

The second of the two Hall of Fame induction ceremonies will occur during the fall of 2015 and will honor the 1975-76 and 1999-2000 men’s basketball teams. This will be a wonderful event for all fans of the Hofstra Men’s Basketball program and will officially serve as their hall of fame induction and as the tip-off to the 2015-16 campaign. In addition, Hofstra fans will have an opportunity to meet the 2015-16 Hofstra Men’s and Women’s Basketball teams, which both will be in attendance at the event.
“It is with great pleasure that we announce the Hofstra Athletics Hall of Fame Class of 2015,” said Hathaway. “This is a strong class that represents the best of the best here at Hofstra. I congratulate each of the inductees and look forward to celebrating all of their outstanding achievements this April and next fall.”

Brymer was a four-year, three-sport athlete from 1974 to 1978 and competed on the women’s basketball, volleyball and softball teams. She captained all three squads and was named Hofstra’s top female all-around athlete as a senior. She was part of the inaugural volleyball team, which began as a club team and became an intercollegiate program in 1976. The team posted a 21-4 record over her final two seasons and Brymer was named team Most Valuable Player in 1977.

Butler was a quarterback on the Hofstra Football team from 1997 through 2001 and was a two-year starter. He holds the program record for most touchdown passes in a season with 30 in 2001 and his 3,311 passing yards that season is the second-highest single season total in school history. As a senior in 2001 Butler was a finalist for the Walter Payton Award, which is presented to the top player in FCS (then I-AA) football.  Butler was a first team All-America selection that season and also was named the I-AA Independent Offensive Player of the Year. He finished his career with 5,844 yards (fourth all-time) and 54 touchdown passes (second all-time). In addition, he rushed for 966 career yards and his 6,810 yards of total offense ranks third on Hofstra’s career list.

Conversano was a standout goalkeeper on the field hockey team from 1989 through 1992 in addition to being a two-year member of the women’s lacrosse team. She holds the Hofstra Field Hockey career record for saves with 1,139 and ranks third all-time in NCAA Division I history. Her single season total of 396 saves in 1990 is a school record and is the third-highest total in NCAA Division I history as well. Conversano was an All-Mideast Region selection in 1992 and an All-East Coast Conference selection in 1990.

Edwards retired in 2014 after serving as the head coach of the Pride Softball team for 25 years and building the program into a nationally-prominent force that captured 18 conference championships and made 15 NCAA Championship appearances. He won 928 games during his storied career and earned 12 National Fastpitch Coaches Association (NFCA) Regional Coach of the Year Awards and eight conference coach of the year awards. Under his tutelage, five Pride Softball players earned All-America accolades and 47 players have been recognized as all-region selections. He was inducted into the NFCA Hall of Fame in 2009 and the Suffolk County Sports Hall of Fame in 2014.

Huff was a standout on the men’s lacrosse and football teams from 1973 to 1978. He was a two-time All-American in lacrosse and was part of three NCAA Tournament teams. Huff was a two-time team Most Valuable Player and would be selected to play in the North-South Senior All-Star Game in 1978 after tallying 32 goals and 19 assists that season. He was inducted into the Long Island Metro Lacrosse Foundation Hall of Fame in 2010. On the gridiron Huff was the first running back in school history to eclipse 1,000 yards when he rushed for 1,055 yards as a senior in 1977. He was named the Metro Conference Offensive Player of the Year and would also earn All-ECAC Division III accolades. In recognition of his outstanding athletic achievements, the lacrosse offices at Hofstra were renamed in his honor.

Metzger, a two-year member of the men’s lacrosse program and an All-American following the 1980 campaign, enters the Hofstra Athletics Hall of Fame in the “Extraordinary Service to Hofstra Athletics” category. In addition to his passion and commitment to Hofstra Athletics, Metzger was also an All-American lacrosse player for the Pride in 1980. He led Hofstra in assists in 1979 (12) and 1980 (28). In 1980, Metzger scored 49 points in only 10 games. His 4.9 points per game average still ranks 5th in the history of the Hofstra lacrosse program. Metzger’s 1980 2.8 single season assist average ranks 8th all time. Metzger is one of only 3 players in the history of Hofstra’s Men’s Lacrosse program to score 8 or more points three times in one season when he recorded 8 points against Penn State, Towson and North Carolina State in 1980. He was a United States Intercollegiate Lacrosse Association All-America honorable mention honoree following the 1980 campaign. Metzger has facilitated many improvements in the Hofstra athletic program over the better part of the last decade and through his efforts, Hofstra has been able to make significant improvements in facilities. The Traditions Project in Margiotta Hall, which recognizes the achievements of the men’s lacrosse, women’s lacrosse and football programs at Hofstra, was created through his involvement, while he also initiated renovations to the men’s lacrosse locker room and women’s lacrosse locker rooms and the lacrosse offices. The men’s lacrosse locker room was rededicated as the Harry Royle-Vinny Sombrotto Locker Room. In 2012 he committed $1.5 million to support Hofstra Athletics, marking the largest gift in the history of Hofstra Athletics.  His contribution established a men’s lacrosse program endowment as well as supported the capital improvement fund, which benefits all 17 sports, and was renamed in his honor.

Schmiesing wrestled for the Pride from 1996 through 2001 and was a two-time All-American at 149 pounds. A four-time NCAA Championships qualifier, Schmiesing placed fifth in 2000 and eighth in 2001. During his tenure he posted a 132-38 record, which is the third-highest win total in program history. Schmiesing won the East Coast Wrestling Association (ECWA) championship three times and was the 2001 ECWA Championship Most Outstanding Wrestler. He was the New York State Wrestler of the Year in 2000 and also earned Most Outstanding Wrestler honors at the New York State Championships that year after winning the 149-pound weight class. In addition, Schmiesing was also a four-time NWCA All-Academic Team selection.

Taylor was a member of the women’s lacrosse program from 1998 through 2001 and is one of just seven Pride players to earn Intercollegiate Women’s Lacrosse Coaches Association (IWLCA) All-America honors. A third team All-America selection in 2001 after tallying a school record 73 points, Taylor recorded 124 goals, 82 assists and 206 points in her stellar career that also saw her earn two IWLCA All-Region and two All-America East Conference selections. Her 82 assists were a school record until 2014, while her then-record 34 assists in 2000 stood for 13 years. She currently ranks second all-time in assists, sixth in goals and fourth in points. Taylor was also part of the Pride’s first NCAA Tournament team in 2001.

The fall 2015 induction of the two men’s basketball programs will honor two of the most successful in program history. More information on the Hofstra Athletics Hall of Fame Induction Ceremony will be announced in the coming weeks.

For ticket information please contact Courtney Crews at courtney.a.crews@hofstra.edu or (516) 463-4919.