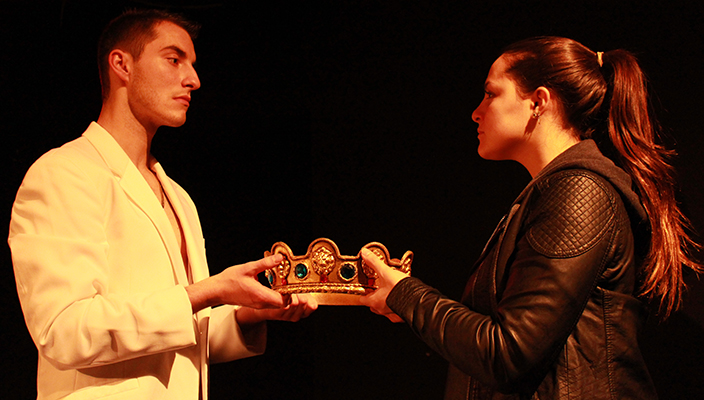 The headline production of Hofstra University’s 66th Annual Shakespeare Festival is Richard II, a story of personal and political transformation, told through the fall of Richard II and the rise of his cousin, Henry of Bullingbrooke, better known as Henry IV. Performances are March 5-15, 2015, at the John Cranford Adams Playhouse. This is the first time in the Festival’s history that Richard II has been performed on the Hofstra stage.

Opening night is Thursday, March 5, at 7 p.m., featuring a free, pre-show reception at 6 p.m. Remaining show times are Fridays, March 6 and 13 at 8 p.m.; Saturdays, March 7 and 14 at 8 p.m.; and Sundays, March 8 and 15 at 2 p.m. Tickets are $12, $10 for senior citizens and matriculated non-Hofstra students with ID. Members of the Hofstra community may receive up to two free tickets upon presentation of a current HofstraCard. Tickets are available at the Hofstra Box Office, Monday-Friday, 11 a.m.-3:45 p.m., at 516-463-6644. Tickets will also be sold at the door by cash or check only; the Box Office opens 90 minutes prior to show time.

Director and drama professor Jean Dobie Giebel explains that Richard II is one of only four plays in the Shakespearean canon to be written entirely in verse, with long sections of rhyming couplets. The play focuses on the last years of Richard’s reign – the exile of his cousin, Bullingbrooke’s return and Richard’s subsequent disposition. Though his downfall is never in question, Professor Giebel says, “The play still engages audiences through its eloquent portrayal of a self-centered and irresponsible ruler whose fall from grace transforms him into a reflective and philosophical poet.” 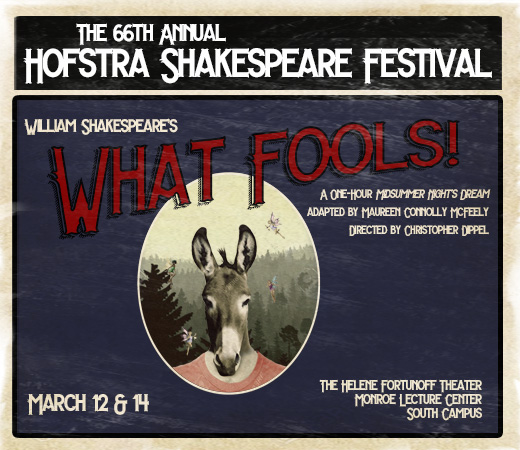 Each Hofstra Shakespeare Festival comprises multiple performances: the full-length Shakespearean play, a shorter dramatic piece and the “Festival Musicale,” a concert by the Hofstra Collegium Musicum, an ensemble from the Music Department devoted to the performance of early music. This year’s Festival Musicale is The Earl of Essex, His Last Good-night, a program of madrigals, lute songs, and instrumental works inspired by the tempestuous relationship between the Earl of Essex, Robert Devereux, and Queen Elizabeth I. The concert features works by John Dowland, Daniel Bacheler, Richard Martin, and other Elizabethan composers.

The companion play is What Fools!, a one-hour version of Midsummer Night’s Dream, an excellent introduction to the works of William Shakespeare, suitable for young theatergoers. This is the eighth year that a one-hour adaptation of a Shakespearean work has been performed as part of the Festival. What Fools! was adapted from Midsummer Night’s Dream by Hofstra Adjunct Professor of English Maureen Connolly McFeeley and is directed by Adjunct Assistant Professor of Drama Christopher Dippel.

There will be a special performance of What Fools! on Thursday, March 12, at 8 p.m. On Saturday, March 14, at 2 p.m., The Earl of Essex, His Last Good-night and What Fools! will be performed together. The location for both dates is The Helene Fortunoff Theater in Monroe Lecture Center, South Campus.  Tickets are $6. Members of the Hofstra community receive up to two free tickets upon presentation of a current HofstraCard on both March 12 and 14.

Other Festival activities include: 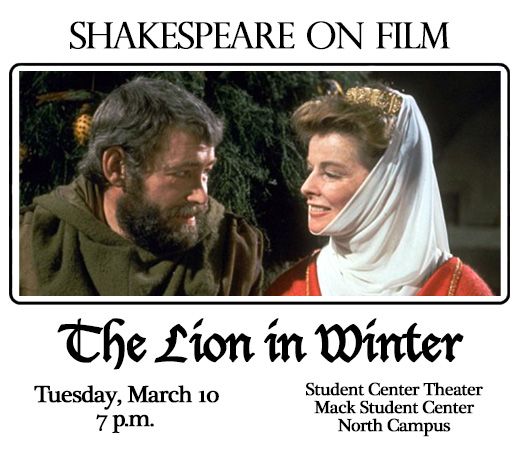 The Monday evening performance is free. Tuesday, March 10, is a benefit for the restoration of Hofstra’s Globe Theater, a 5/6 reproduction of Shakespeare’s Globe Theatre that debuted at Hofstra in 1951. It was the first stage of its kind in the Eastern United States. Following Tuesday’s show, a reception at the Libby and Joseph G. Shapiro Alumni House follows. For ticket prices (including discounts for graduates of the last decade) visit hofstra.edu/globe2015.

Tuesday, March 10, 7 p.m. Screening of The Lion in Winter, the Academy Award-winning film adaptation of James Goldman’s play, depicting a succession crisis in the early days of the Plantagenets. Admission is free. Location is the Student Center Theater, Mack Student Center, North Campus.