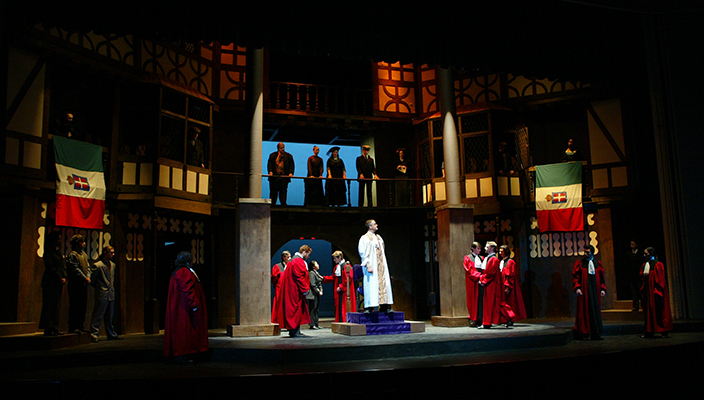 The Department of Drama and Dance presents a 50-Minute Romeo and Juliet, a collaboration between Hofstra alumni and current students on Monday, March 9, and Tuesday, March 10, 2015, at 7 p.m. the Proceeds from the March 10 performance benefit the rebuilding of Hofstra’s Globe stage, a replica of Shakespeare’s Globe Theater that was renowned for decades for the authentic acting and educational experiences it offered students.

The 50-Minute Romeo and Juliet takes place at the Emily and Jerry Spiegel Theater, located on California Avenue on Hofstra’s South Campus. The March 9 performance is free. Reservations for the March 10 benefit are available at hofstra.edu/globe2015. Discounts are available for Graduates of the Last Decade (GOLD).

The 50-Minute Romeo and Juliet is presented in collaboration with L2K Communications Inc., and The Shakespeare Project of Chicago. Current students Maya Carter and Justin Chesney star in the title roles. They are sharing the stage with alums Lydia Leeds and Peter Garino, both Class of 1977, who performed in the Shakespeare Festival together during their student years. Leeds, founder of L2K Communications, is executive producer, associate director and performer for this production. Garino, artistic director of The Shakespeare Project of Chicago, is also associate director and performer. He and Shakespeare Project colleagues Barbara Zahora and Michelle Shupe adapted and abridged Romeo and Juliet.

When asked to explain how she became involved with the benefit, Ms. Leeds says, “I was inspired to reconnect to my Hofstra community a few years ago and wanted to do more to bridge the gap between alumni and undergrads, share what I now know and have a chance to demonstrate just some of the things I learned at Hofstra a hundred years ago.

“I also want to raise awareness and money for the reinvention and reinstatement of Hofstra’s replica of the Globe.”

The story behind Hofstra’s Globe stage begins with noted Shakespearean scholar John Cranford Adams, president of Hofstra from 1944 to 1964. For many years Dr. Adams had researched the design of Shakespeare’s Globe Theatre, and he created a model of the Globe in a ratio of one-half inch to one-foot scale. The public debut of the model coincided with the premiere of the first Shakespeare Festival, a production of Julius Caesar, in 1950. The life-scale replica of the Globe, based on Dr. Adams’ model, opened in time for the second annual Festival. The Hofstra set is a 5/6 reproduction, and it was the first of its kind in the Eastern United States. The John Cranford Adams Playhouse opened in 1958, and its stage was constructed so as to accommodate the Globe replica.

Up until Hofstra 2008’s production of Hamlet, the majority of Shakespeare Festival productions had taken place on the Globe. Constructed largely of pine and plywood in 1950 and built to be easily taken apart and stowed between productions, it was deemed no longer safe after decades of use.

The planned reconstruction of Hofstra’s Globe will also take into account new research and evidence that greatly impacted Shakespearean scholarship. In 1989 archaeologists in London uncovered the almost-intact foundation of the Rose Theatre and a partial foundation of the Globe. These remarkable discoveries, along with modern imaging techniques and computer analysis of original documents, has created a much clearer picture of how the Globe was built, what it may have looked like, and how it functioned.