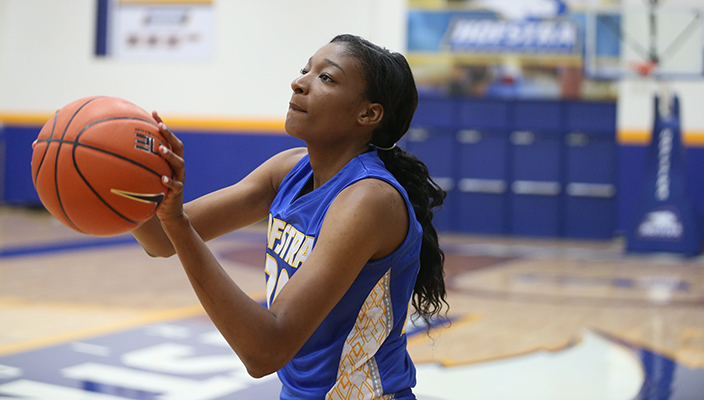 Anjie White wasn’t thinking about game-winning baskets when she had to sit out a year and half. Transferring from George Washington University in the middle of the 2013-14 campaign meant lots of downtime on the bench during games. It was a slow process knowing she would lose the entirety of a season and the first semester of another.

Watching her teammates take the court while watching in sweats wasn’t initially in the plans for White, who was ranked as the 20th-best post player by ESPN HoopGurlz in 2012 after a season in which she averaged a double-double for Sanford High School. The Newark, Delaware, native earned the Gatorade Player of the Year honor for her state.

But the step up to Division I wasn’t an easy one. White started seven of her 29 games in her freshman season at George Washington before looking for a change. Just 18 games and seven starts into her Hofstra career, the change-of-scenery narrative has paid off for both player and team. White scored the game-deciding points in two-of-three road games during Hofstra’s five-game winning streak that ended Sunday, including two clutch free throws that helped the Pride to a 63-62 win over No. 23 James Madison that was just the second in program history over a ranked opponent.

“It was hard not being able to help my team,” White said. “I don’t regret anything. My teammates and coaches kept pushing me to get better in the offseason. I just wanted to find my place and find what I can do to help us reach our team goals.”

Since first putting on a Hofstra uniform in a road win over ACC-member Boston College on Dec. 21, White has been a major factor. The 6’2″ post player came off the bench in her first 11 games for the Pride but logged double-digit minutes in all but one of those games.

Then a minor injury to freshman forward and CAA Rookie of the Year candidate Ashunae Durant put White into the starting lineup. While Durant has returned, White maintained her spot in the starting lineup for the last seven games. Hofstra is 5-2 in that stretch, with wins at Elon and JMU featuring last-minute key shots from White that made the difference.

“It lifts my confidence because my teammates and coaches trust me to give me the ball at the end,” White said. “It puts pressure on me, but now I know I can do it and it helps me believe in myself.”

White’s path to Hofstra was circuitous and started in New York city-based gyms when she was a high school prospect and member of the AAU New York Gauchos along with future Hofstra teammates Asia Jackson and Sydni Epps.

“She was extremely long and gritty,” Hofstra Head Coach Krista Kilburn-Steveskey said. “You’d go after her and she’d fight hard. She was tough and had range even back then.”

White didn’t choose Hofstra following her stellar prep career, though playing with Jackson and Epps, and the initial contact with Kilburn-Steveskey put Hofstra in her mind when she was looking for a transfer following her freshman year in which she averaged three points and 2.4 rebounds for the Colonials.
Once granted her release, White received a surprise call from a voice from her past.

“I  verbally-committed very early to George Washington, so I was surprised to get a call from Coach Kilburn-Steveskey when I was transferring because most coaches get mad when you don’t commit to them and don’t want to talk to you after you’ve rejected them,” White said. “But coach welcomed me with open arms and that’s the type of person she is. I was surprised but I was very thankful and appreciative.”

White talked to Epps about the campus, and their prior experience as teammates helped ease the transition to a new school. While getting used to her new surroundings, White was itching to make a difference on the court. As she worked her way into game shape, White provided complementary scoring to a frontcourt dominated by Durant and sophomore Elo Edeferioka.

Utilizing a high-arching left-handed jumper, White continues to make shots with the precision of a toxophilite. Out of the 11 Hofstra players averaging at least seven minutes, White’s shooting percentage of 49.2 trails only Durant (49.5 percent) for the team lead. If she qualified for the CAA lead, her percentage would rank fifth-best entering the weekend.

“Once we started conference play, she really stepped up her game,” Kilburn-Steveskey said. “I wanted her to take charge, set ball screens and be a focal point. With her lefty shot, people go to close her out and they forget that aspect. She has a great turnaround shot and she’s quick off the spin. It’s a deadly combination.”

White, a redshirt sophomore, was averaging 9.7 points and 5.4 rebounds in 19.9 minutes before Elon. Her usage percentage, which is an estimate of the percentage of team plays used while on the floor, is second only to team leading scorer Kelly Loftus. On the boards, her 20.1 defensive rebounding percentage means she grabs more than one-fifth of all available defensive rebounds while on the floor, which is the second-most on the squad behind Edeferioka.

Playing expanded minutes and being a two-way factor started long before she walked out on the Conte Forum court against Boston College in December. Though not eligible to play in games, White trained daily with Emily Esselman, Hofstra’s assistant strength and conditioning coach. Four times a week, White worked with Esselman doing squats, bench presses, dead lifting and other forms of weight training. They also emphasized conditioning by running sprints and jumping with weights to help improve her vertical leap, which has paid dividends with an increased workload as Hofstra heads into the Colonial Athletic Association Championship.

“Getting her to understand the physicality it takes to compete in our league was the first step,” Esselman said. “Once she started seeing results, she was lights out working with me.”

“She (White) even said to me that the better her conditioning was, the more focused she was on the court. The stronger she got, the less she was worried about being tired and was able to focus more on what she was doing out on the floor.”

The mental aspect of the game isn’t intimidating for White, who is a psychology major with an interest in criminology. Besides the athletic and academic opportunities, White says her mother, Tia Tucker, and grandmother, Mary Nixon, are able to come see every home game at the Mack Sports Complex by driving in from Delaware. “They always sit in the front row,” White said with a laugh. Her father and brothers, who live in the Bronx, are also able to see her play in Hempstead.

White has helped Hofstra stay in the hunt for a high seed. The Pride is 18-10 overall and 11-6 in the CAA entering the regular season finale on Wednesday at UNCW.