The Hofstra North Shore-LIJ School of Medicine today unveiled an ultramodern 63,000-square-foot addition and announced it has earned full accreditation, signaling the start of a new era as the charter class prepares to graduate this spring.

The new building features a soaring, sun-filled atrium and state-of-the-art facilities, including a 7,300-square-foot structural anatomy lab. It more than doubles the size of the medical school.

Full accreditation by the Liaison Committee on Medical Education (LCME), which accredits all medical schools in the United States and Canada, means Hofstra North Shore-LIJ School of Medicine and its innovative approach to medical education meet strict national standards for structure, function and performance.

These critical milestones come as the charter class prepares for Match Day on March 20 (the first in school history) and commencement in May. Match Day is when students learn where they will perform their residencies.

“This is an extraordinary moment in the history of the Hofstra North Shore-LIJ School of Medicine,” said Hofstra University President Stuart Rabinowitz. “We imagined a new kind of partnership and a new model of medical education that would lead to better health care for our region. Today in this beautiful space, we stand quite literally at the crossroads of the old and the new to celebrate the journey of the past seven years and challenge ourselves to aim even higher in the future.”

Today’s grand opening and announcement are the culmination of a process that began more than seven years ago – in October 2007 – when Hofstra University and North Shore-LIJ Health System announced plans to partner and open the first allopathic medical school in New York state in more than 40 years. 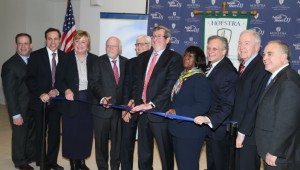 “As soon as representatives from North Shore-LIJ and Hofstra University began discussing the concept of a medical school in 2007, we made a decision to become a change leader in medical education,” said Michael Dowling, president and CEO of the North Shore-LIJ Health System. “We capitalized on the resources of the health system and the university to teach the basic science of medicine in the context of real clinical problems, provide students with clinical experience right from the beginning and help them become lifelong learners who will be the medical leaders of the future.  The LCME accreditation validates our visionary approach and the Hofstra North Shore-LIJ School of Medicine’s standing as an outstanding medical institution.”

The original medical school building, formerly the home of the New York Jets training facility, opened in 2010. Construction of the new, two-story addition began in June 2013.

“Our expanded facility is a reflection of the new model and approach to medical education that we have worked so tirelessly to establish over these past seven years, and it’s working for our students,” said Lawrence G. Smith, MD, MACP, founding dean of the Hofstra North Shore-LIJ School of Medicine. “It is an achievement made possible through the collaborative efforts of our dedicated faculty and staff who continually raise the bar for teaching the next generation of clinicians and leaders in medicine.”

Student body President Kevin Smith said he and his classmates are “thrilled to have been a part of the evolution of the school over the past four years, culminating in the completion of our School of Medicine building expansion and achievement of full LCME accreditation.”

The estimated cost of the project is $35.9 million, $14.5 million of which was provided through $25 million in New York State Economic State Development Corporation grants secured by Hofstra University in 2008.

The grants were sponsored by the New York State Senate delegation, led by Majority Leader Dean Skelos and State Senator Kemp Hannon. A portion of the 2008 grants was used to renovate the original medical school facility. The $21.4 million balance for the new building was financed through bonds issued by the Town of Hempstead Local Development Corporation.

“Today is an exciting day for the future of medical care in our region,” Sen. Skelos said. “I am thrilled to have helped play a role in supporting such an ambitious project that will significantly expand the capacity for learning here at the Hofstra North Shore-LIJ School of Medicine for many years to come.”

Sen. Kemp Hannon (D-Nassau), Chair of the Senate Standing Committee on Health, said that “today’s grand opening celebrates the dream of making the Hofstra North Shore-LIJ School of Medicine one of the premier medical schools in the country. Students from the community and around the globe will flock to Hofstra to advance innovations in medicine, important academic work and improvements in our biotech and health science industries.  It’s a great day that ushers in a new era for Hofstra.”

New York State Comptroller Thomas P. DiNapoli said: “As a Hofstra University alumnus, I’m proud of the progress the university has made to become one of the nation’s premiere medical teaching centers. The new state-of-the-art facility is one of the many examples of Hofstra’s commitment to providing its students with an excellent education and being an asset for the community.”

Nassau County Executive Edward P. Mangano, who earned his bachelor’s and law degrees from Hofstra, noted the economic impact of the medical school.

“I welcome Hofstra North Shore-LIJ School of Medicine’s expansion which will provide educational and employment opportunities for Nassau’s growing health care economy,” Mangano said.
“As County Executive and an alumnus of Hofstra University, I am thrilled to join in today’s celebration.”

Town of Hempstead Supervisor Kate Murray said the expansion of the medical school positions the region well to answer the demand for health care professionals. The Association of American Medical Colleges projects a physician shortage of 130,000 by the year 2025.

“Jobs in the medical field are among the fastest-growing occupations in the nation, and Hofstra University is demonstrating its unwavering commitment to preparing students for the future, and placing many highly trained young professionals in the workforce,” Murray said.

“Congratulations to Hofstra University and the North Shore-LIJ Health System on the completion and opening of this new and improved Hofstra School of Medicine,” she said.

Designed by architectural firm HLW International, the new building has extra wide corridors to create a “Main Street”-type environment that encourages collaboration and community. The challenge, according to John Gering, managing partner of HLW, which also designed the original facility, “was marrying the old space with the new space and to make it seamless.”

“Our philosophy is about creating a culture – where do people learn? Where will they work?” Gering said. “The curriculum is innovative and the environment needed to reflect that.”

Paul O’Rourke, executive vice president of EW Howell, the construction manager for the project, noted that several Hofstra alums work for the firm. EW Howell has worked on several other Hofstra projects, including the Netherlands and Graduate residence halls.

“We have a long history with Hofstra, and to see Hofstra become a premier medical school with North Shore-LIJ, to be a part of something that keeps attracting great students to come to Hofstra – that is what makes me really proud,” O’Rourke said.

“In accordance with Hofstra University’s continued strive for excellence in education and in response to a demand for greater trained medical professionals, “ Cameron said, “the University in conjunction with North Shore-LIJ established an objective to provide a new School of Medicine building that was designed and constructed to green standards, reflecting the sustainable principles that the institutions imbue.” 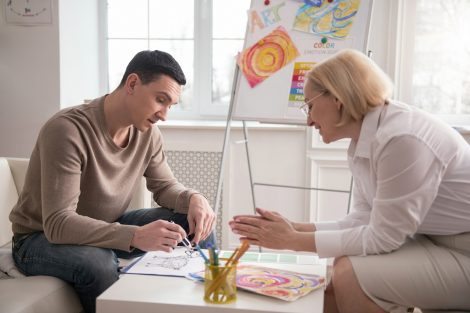