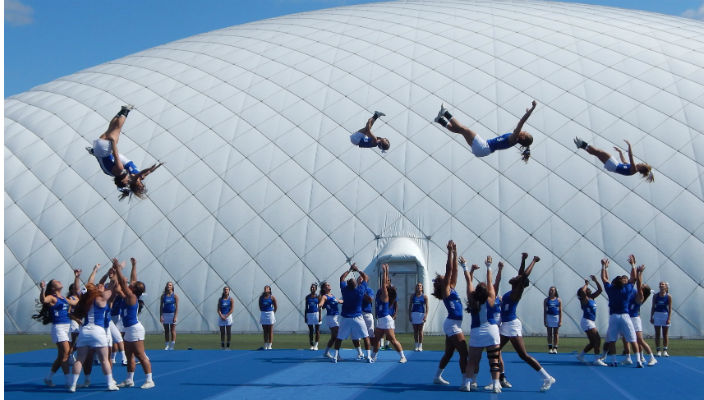 A photo by senior journalism student Christina Ferraro in the Lawrence Herbert School of Communication has been chosen as a finalist in a national competitive student photography contest.

Ferraro’s photo (featured above) of the Hofstra cheerleading team was taken during a performance at Fall Festival.   As a finalist, the photo will be included in this year’s Best of College and High School Photography, an annual hardcover volume produced by Photographer’s Forum magazine.

This is the second time in the last few years that a Hofstra student’s photo has been chosen as a finalist in this contest, according to Dan van Benthuysen, Ferraro’s photojournalism professor who helped her choose which image to submit.

“At a point in our culture when nearly everyone has a camera in their cell phone, I’m pleased that Hofstra students continue to develop a superior visual sense of how to tell a story,” he said.

Her photo was chosen from among 17,000 entries in the contest, which was sponsored by Serbin Communications, publisher of Photographer’s Forum.

Ferraro, who minors in rhetoric and works part-time as a high-school sports reporter for Newsday, hopes to pursue a career in sports journalism and photography.