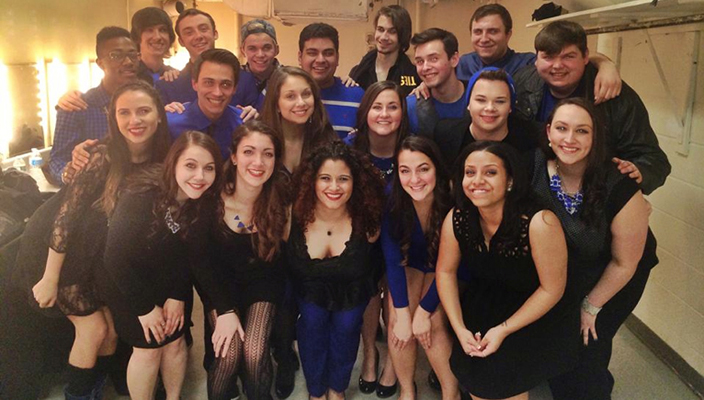 In their first year of competition, Hofstra University’s Sigma’cappella unseated NYU’s renowned N’Harmonics, at the International Championship of the Collegiate A’cappella Northeast Quarterfinal on Saturday, February 14, at the John Cranford Adams Playhouse. Sigma’cappella is the first group in the past decade to win the quarterfinal in its inaugural year of competition. Other participating students were from Columbia University, Fordham University, NYU, Stony Brook, CUNY Queens College and The Macaulay Honors College at CUNY.

All the competing schools performed either a combination of songs with breaks in-between or an arrangement of continuous singing. Sigma’cappella performed a continuous 10-minute set and came away with an award for Outstanding Arrangement in addition to winning the championship. Alex Lavoie, vice president of Sigma’cappella, notes that each group “draws a number at the beginning of the competition, so the order of performance is unknown until that day. Also unknown is who the judges are, so the groups do not know who they are performing for. Each group takes the stage, does their set and exits.”

Alex says Sigma’cappella’s set includes many crowd-pleasers, as well songs that may be unfamiliar to the audience. “We push boundaries,” he says. The group now advances to the ICCA Northeast Semifinal at Boston Symphony Hall on March 22 at 2 p.m. They will face off against their rival N’Harmonics as well as groups from Harvard University, Emerson College, Berklee College of Music, SUNY Purchase, Northeastern, and other colleges and universities. Tickets to the semifinal are available online. Or show your support for Sigma’cappella by “liking” them on Facebook and following them on Twitter.