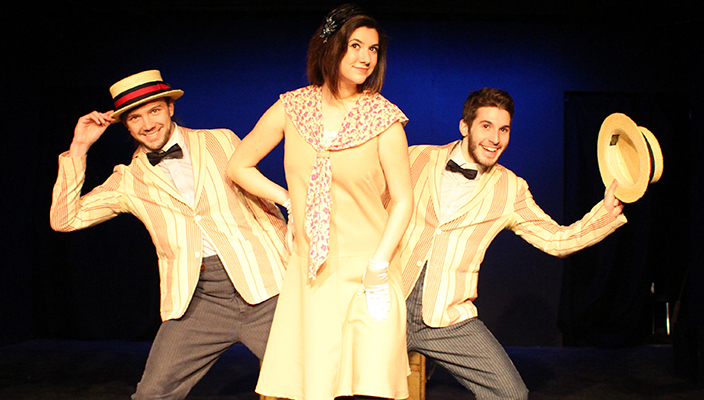 In addition to a multimedia production of Richard II, Hofstra University’s 66th Annual Shakespeare Festival includes a concert of early music performed by the Hofstra Collegium Musicum and a one-hour adaptation of A Midsummer Night’s Dream titled What Fools! on Saturday, March 14, at 2 p.m. at The Helene Fortunoff Theater, Monroe Lecture Center, South Campus. There will also be a special performance of What Fools! on Thursday, March 12, at 8  p.m.

This is the eighth year that a one-hour adaptation of a Shakespearean work has been performed as part of the Shakespeare Festival. What Fools! was adapted from A Midsummer Night’s Dream by Hofstra Adjunct Professor of English Maureen Connolly McFeeley and has been reimagined and directed by Adjunct Assistant Professor of Drama Christopher Dippel to take place in the world of vaudeville.  It is an excellent introduction to Shakespearean theater for young people.

The Hofstra Collegium Musicum’s Festival Musicale is an ensemble of students, faculty and alumni from the Music Department devoted to the performance of early music. The Festival Musicale includes a chorus and ensembles of historical instruments. This year’s Festival Musicale is The Earl of Essex, His Last Good-night, a program of madrigals, lute songs, and instrumental works inspired by the tempestuous relationship between the Earl of Essex, Robert Devereux, and Queen Elizabeth I. Works by John Dowland, Daniel Bacheler, Richard Martin, and other Elizabethan composers are featured. The Hofstra Collegium Musicum is under the direction of Adjunct Assistant Professor Christopher Morrongiello. 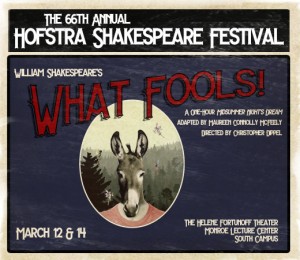 Tickets to the March 12 and 14 performances at Hofstra are $6. Members of the Hofstra community receive two free tickets upon presentation of a current HofstraCard.  For tickets and more information call the Hofstra Box Office at 516-463-6644 or visit hofstra.edu/drama-dance or hofstra.edu/music.

In addition to the Hofstra performances, the cast and crew of What Fools! tour local high schools. The tour gives the Hofstra students the extremely valuable experience of taking a show on the road – the tour is something they manage logistically and artistically.

What Fools! tour dates are:

and Monday, March 9, at Lawrence Woodmere