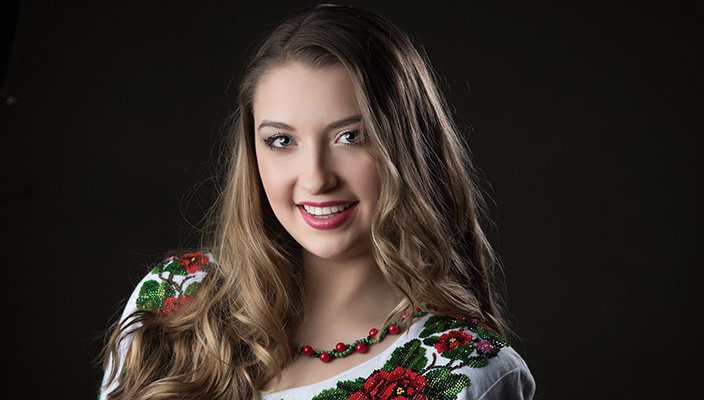 Kristina Shafranski, a sophomore majoring in music and political science, will represent the United States at the 2015 Cantamare Summer Festival in Sicily, Italy, after winning the 20th Annual Festival of Song USA on January 25 at El Caribe Restaurant in Brooklyn. The Festival of Song USA is presented by Silvana Romania of Radio ICN (Italian Communication Network).

Kristina, who resides in East Meadow, NY, faced competition from approximately 40 other singers, dancers and musicians, the top 14 of whom were invited to perform at The Festival of Song. There was a wide range of music genres and styles represented, but Kristina stood out for her performance of Puccini’s aria “O mio babbino caro,” the only classical song of the event.

Kristina, who is of Ukrainian heritage, started performing in public at the age of 7 and frequently appears at summer Ukrainian festivals along the East Coast and Midwest. At Hofstra, she performs with Hofstra Opera Theater and with Adjunct Associate Professor Isabel Milenski’s “Opera Scenes” class. She also studies closely with Adjunct Associate Professor of Music Tammy Hensrud.

Outside the classroom and offstage, Kristina is a Student Government Association senator at Hofstra, where she serves on the Spirit Committee and Public Relations Committee.

Kristina decided to add a political science major to her vocal performance studies after taking a law class in high school and “falling in love with it.” As for life post-Hofstra, she isn’t afraid to set high career goals. “I would love to sing in opera houses around the world,” she says.