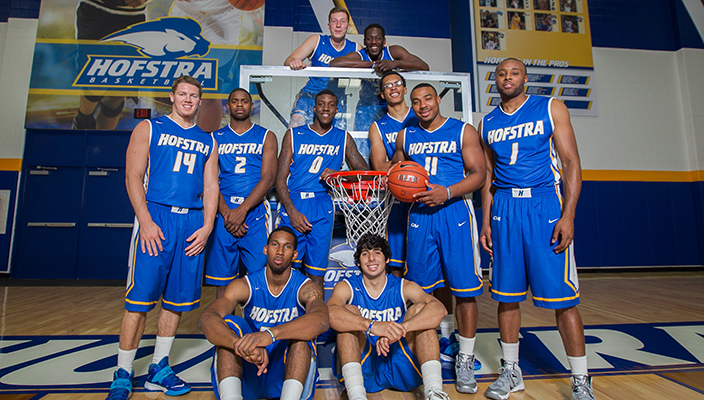 The Hofstra Men’s Basketball team will look to extend its win streak to three games and WHITE OUT the David S. Mack Sports and Exhibition Complex on Thursday when the Pride hosts Colonial Athletic Association preseason favorite Northeastern at 7 p.m.

The first 2,000 fans at the game will receive FREE WHITE OUT t-shirts and all fans are encouraged to wear white to the game. The game will be televised nationally on the NBC Sports Network with Mike Corey and Ronnie Thompson on the call.

Pride Productions will have live audio with Dan Savarino, Andrew Fertitta and Chris Buckley on the call. The audio only broadcast, which begins with a pregame show at 6:30 p.m., will also be available locally on WGCH (1490 AM).

The 11-point victory over Elon on Saturday was fueled in part by outstanding play from graduate guard Dion Nesmith and senior center Moussa Kone. Nesmith led all players with a season-high 22 points on 7-10 shooting from the field, while Kone nearly tallied a double-double with 10 points and nine rebounds.

Green ranks second on the team in scoring at 17.4 points per outing, while leading the team with 6.4 assists and 1.5 steals per game. Tanksley is the Pride’s top scorer at 17.7 points per contest. Nesmith increased his scoring average to 10.6 points per game with his scoring outburst against Elon. Tanksley and freshman forward Rokas Gustys lead Hofstra with 6.2 rebounds per outing.

Longtime rivals, Hofstra and Northeastern will be meeting for the 38th time on Thursday. A very close series, the Huskies hold a narrow 19-17 lead in the all-time meetings which started in 1949-50. Northeastern won the first-ever meeting, 55-53, and has captured the last seven meetings in the series, including a 91-83 victory in Boston last month. Hofstra’s last wins in the series came during the 2010-11 campaign when the Pride swept the season series. Hofstra Coach Joe Mihalich is 0-3 all-time against the Huskies.

Heading into the week, Northeastern is tied for second in the conference standings with UNCW at 8-4. William & Mary leads the conference with a 9-3 mark, while Hofstra, James Madison and Drexel are tied for fourth with identical 7-5 records in CAA play.

Scott Eatherton is the top player on Northeastern as he leads the Huskies with 14.4 points and 6.5 rebounds per game. A trio of other players score in double figures as well as David Walker (11.9), T.J. Williams (10.6) and Quincy Ford (10.1) all score at least 10 points per outing. Williams leads Northeastern with 87 assists.

The game against Northeastern will be the first of two televised games this week for the Pride as Hofstra will head to Drexel on Sunday for a 5 p.m. game against the Dragons that will air locally on SNY.