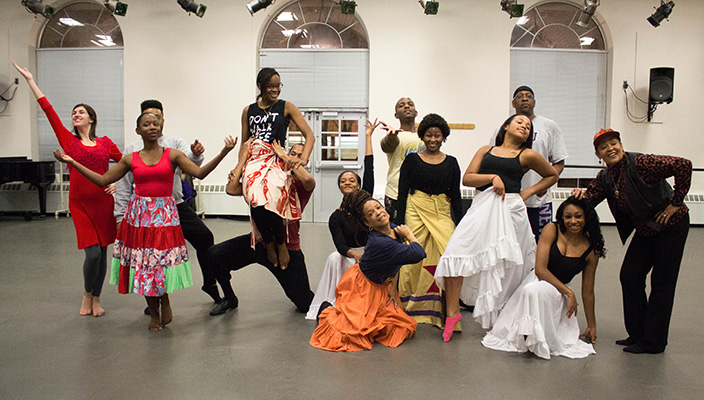 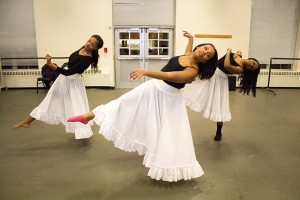 Among the talents showcased will be that of recent alum Andres Maldonado ’14, who has composed new work based on a traditional Afro-Columbian folk dance, and current Hofstra student Maya Carter, a singer and actress.

For his senior music recital Maldonado wrote a composition dedicated to the memory of his late mother. “It’s a genre of music called a Cumbia which is heavily rooted in Colombia’s Afro-Colombian community,” he says. “It was a dance of courtship by African slaves in 17th century Colombia, as well as a dance of freedom and liberty. The percussion instruments are of African origin. The text of the music is taken from the love sonnet Midday XXXIV, by the Latin American poet, Pablo Neruda. I’m Colombian on my mother’s side, so I wanted to create a piece that combined the beautiful lyricism of Neruda and the highly rhythmic energy of a Cumbia to capture her joy, exuberance, and ever-present beauty that my family and those close to her knew and loved.”

Carter, a junior from Boston, is pursuing a BFA in Theater Arts, with a concentration in performance. She has been involved with the Black History Month concerts at Hofstra since her freshman year. During this year’s performance she will use narrative and poetic passages to weave together different pieces of music and dance. She says, “Working on these concerts is a welcome opportunity to celebrate my history as an African American woman and shed light on the integral position that the arts hold in the black community.”

Show time is 5 p.m. on Sunday, February 8, 2015, at the John Cranford Adams Playhouse. Tickets are $12 general admission, $10 senior citizen (over 65) or matriculated non-Hofstra student with ID. Members of the Hofstra community receive two free tickets upon presentation of a current HofstraCard. For tickets and more information, including tickets for schools, call the Hofstra Box Office at (516) 463-6644, Monday through Friday, 11 a.m.-3:45 p.m.

This concert is sponsored by the Hofstra Cultural Center and the Hofstra Music Department, and funded in part by the D’Addario Community Music Appreciation Initiative, a multi-faceted program designed to increase knowledge and appreciation for all types of music among a broad range of young people. The initiative addresses several needs at Hofstra and in the local community, including to promote music appreciation and to allow Hofstra’s student music ensembles to visit and perform in local schools and inspire children.