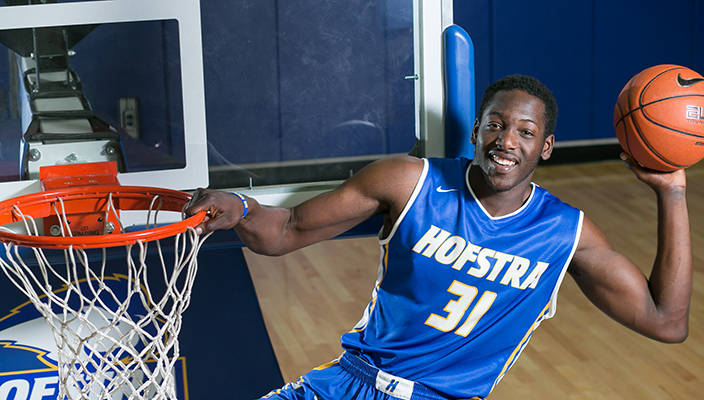 The team first had to avoid being pelted with a high-velocity basketball being sent its way. Once that danger was clear, the Hofstra bench waved towels waved and rose from the blue seats on the bench to greet their resident rim protector coming into a media timeout.

Senior forward Moussa Kone (pronounced MOOS-a KONE-a) had just swatted away Drexel’s Tavon Allen’s shot, giving him one of his two blocks en route to an eight-point effort that helped to lift Hofstra to an 86-58 win.

Kone helped Hofstra snap a seven-game losing skid to the Dragons. It was also just another example of Kone finding success after playing through adversity in his first three collegiate seasons.

“Moussa is a high-character person who works hard and wants to please you, and as a coach, it all starts with that,” Hofstra Head Coach Joe Mihalich said.

Before the calendar hit February, the Pride already has posted the highest win total in since 2010-11 with 14 victories against just seven losses. A 5-3 conference record represents a good start for the Pride. But it means something more to Kone. In his first three seasons at Hofstra, his teams never won more than five league games.

Hall of Fame coach John Wooden said during UCLA’s dynastic run that “things turn out best for the people who make the best of the way things turn out.” Kone continues to embody that mantra in his senior season with the 6’11” forward averaging a career-high 7.8 points along with 5.1 rebounds. In the Pride’s last game he had a double-double (his first of the season) with 13 points and 11 rebounds versus James Madison.

That statistics don’t encapsulate Kone’s journey from second-team All-Bronx selection out of Frederick Douglas III high school to Hofstra, which spanned two coaches and a transition from a pair of down years to the Pride’s resurgence as Colonial Athletic Association contenders in his last collegiate campaign.

“I’m just happy he’s having success in his senior year, both from a team and individual standpoint, because if there’s anyone on our team that deserves to have success, it’s Moussa,” Mihalich said.

The well-earned success came after Hofstra won just 17 combined games in his first two seasons and lost in the opening round of the CAA Tournament. The team’s troubles exacerbated the problems, though Kone said he did not contemplate transferring.

His decision to stay was reaffirmed when Mihalich took over before the 2013-14 season. From the first meeting with Mihalich, Kone said he was excited to play for someone who favors an up-tempo style and utilized ball screens. But just as important as the tactics was the coach’s ability to bring stability and discipline – hallmarks of Mihalich’s Niagara teams that he helmed from 1998-13 – to the Pride.

“There was never any doubt that I would stay,” Kone said. “I’m a loyal person and I signed up for a reason. I wanted to see it through. I’m excited now because it took a few years for us to get on track, but now we have a winner.

“You have to appreciate the successful start and it makes you cherish wins even more. Even in losses, I get upset as far as how I play because this season has a chance to be special.

That first-meeting impression also left a mark on Mihalich, who knew that Kone was frustrated following a sophomore season in which he still finished second on the team in rebounding.

“The thing that stuck out to me when I first met Moussa was that he wanted to leave here a winner,” he said.

Kone responded to the new coaching staff by having his best collegiate season in 2013-14. He set career-highs with 7.1 points, 5.9 rebounds, total blocks (37), assists (16), total points (234) and field goal percentage (56.2). Under Mihalich’s tutelage, Kone has also climbed the Hofstra all-time leaderboard in blocks with 103, which places him in the program’s top-five.

Kone was one of four freshmen on the 2010-11 squad but the only one who will end his career in a Hofstra uniform. Yet the lack of four-year relationships hasn’t hindered the team from forging close connections. Juan’ya Green and Ameen Tanksley transferred from Niagara when Mihalich made the move from the MAAC school, and their arrival to campus proved mutually beneficially for the newcomers and the holdover.

“I picked their brains and tried to understand coach better to see what he wanted and expected,” Kone said. “It worked the other way, too. I gave them input on the program and what the campus was like.

“Both players have been great assets on-and-off the court. Juan’ya is a floor general and Ameen is one of the toughest players I’ve ever been around. They boost the intensity level and as long as they are in the game, we want to match their intensity. They’ve been great to be around.”

Fighting through adversity was something Kone needed to do before he even had to worry about conference standings or RPI power indexes. He is legally blind in his right eye, and, in order to protect his left eye, Kone has worn goggles (similar to that of Knicks forward Amar’e Stoudemire).  Kone said he would like to continue playing basketball at a higher level following his graduation this May. The criminology major could have some different career options, though he is concentrating solely on securing his first collegiate winning season and potentially play in his first postseason game before leaving Hofstra.

“I’m just going with the flow but I know it will sink in come May that I’m a senior. I’m just trying to play the season out and see how it goes. I want to play professionally but I’m just taking this season at the pace we are going.”