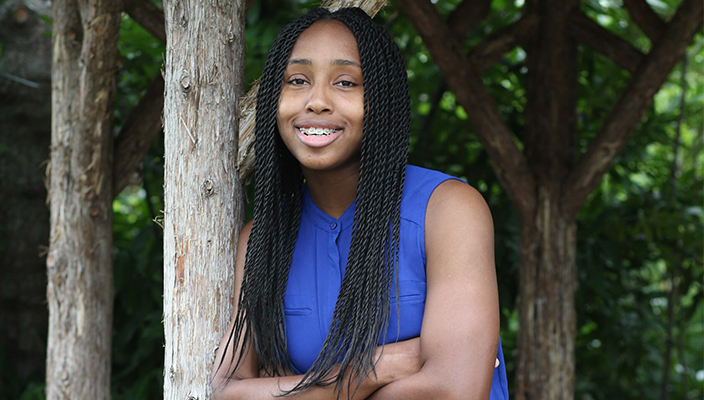 A plethora of talented players marked the New Jersey Sparks roster the day Hofstra Head Coach Krista Kilburn-Steveskey came to see the AAU team in action. Five-star recruits and all-state selections were on display. But one particular player stood out; not for any Allen Iverson-esque crossovers or flashy one-on-one ball-handling, but for executing the fundamental element of possession-orientated basketball.

Even as a prep player, Ashunae Durant exhibited the same tenacity on the glass that has helped her became an instant-impact player at the Division I level in starting her first nine collegiate games for Hofstra in the team’s 6-3 start that is the program’s best since 2011.

“I fell in love with her as a player the first time I watched her because she was getting every single rebound and would come in and be a difference maker as soon as she got in the game,” Kilburn-Steveskey said. “Her role then grew. She was a defender and rebounder for them and she then became a strong scorer and a huge offensive presence.”

It’s a trajectory that Durant has replicated in her young college career. Before the season hits double-digit games, Durant has already earned two Colonial Athletic Association Rookie of the Week honors and is third on the team in scoring with 11.3 points-per-game and second in rebounding at 6.9.

Kilburn-Steveskey called Durant a “glue” player who used to be the first one off the bench for the Sparks before exceling for both the travel squad and her high school Bloomfield Tech, where she graduated as the program’s all-time leading scorer.

Highlighting a player’s hustle and willingness to fight for the ball can often be used to accentuate the positive attributes of an athlete who isn’t highly skilled. But platitudes regarding determination shouldn’t negate the fact that Durant was evaluated as a highly skilled all-around player. In her 2014 senior season, ESPN HoopGurlz rated Durant the 75th-best overall high school prospect and labeled her a four-star recruit as a guard.

Though labeled as the 15th-best prospect at her position, Durant has seen ample time in the low post on a guard-rich Hofstra squad. Her overall abilities have been evident in the stat line, with six games of double-figure scoring, including the first three contests of her college career. She has also posted two double-doubles and a near miss after scoring a season-high 20 points with nine rebounds in the team’s win at NJIT in the previous game.

“I knew it wasn’t going to be an easy road,” Durant said. “I knew I had to prepare myself before I even got here. I didn’t know what to expect, so I let the game come to me and I’m just going out and playing.”

The pulling-teeth metaphor can be used for some player-coach relationships, though a literal dental issue marked Durant’s initial introduction to Kilburn-Steveskey and the coaching staff.

“She used to call me all the time in the recruiting process, but I had three teeth that needed to be pulled during that time, and it seemed like every time she would give me a ring, I was getting another tooth pulled,” said Durant, who currently wears braces. “I kept saying ‘who is this lady?’ Then I found out it was the head coach at Hofstra. She’s a character and real funny. It was an easy decision to come here.”

A product of Newark, Durant is able to play in front of her family and friends with Hempstead less than 40 miles away. But Durant also put on a show in her hometown when she shot 7-of-9 from the field and 6-of-7 from the line in the win over NJIT. One sequence showed her all-around ability midway through the second half at the Fleisher Athletic Center when, in a 40-second span, she grabbed an offensive rebound and scored off the put-back, stole the ball from Ronni Grandison, hit Jakelle King-Gilchrist with a pass that helped draw a foul and then grabbed another offensive rebound off a missed shot from the line.

“She knows the game and has a high basketball IQ,” fellow freshman teammate Olivia Askin said. “She can play with anybody. She can take control of a game. She always stays calm and knows what to do.”

Askin also was a standout high school player from New Jersey (playing for Shawnee) and first met Durant when the two were playing in the New Jersey North-South all-star game on opposite sides.

“We played each other and we met for the first time before the game,” Askin said. “We took a picture together and sent it to coach,” Askin said. “As far as being on campus now, it helps to have someone go through the process with you with both the classes and basketball aspects.”

During the team’s media day, Kilburn-Steveskey wasn’t shy about comparing Durant to some of the best players in the program’s history such as Shante Evans. She said Durant’s mentality and aptitude on the court reminds her of Evans, who was a three-time Associated Press All-America selection and the program’s all-time leader in points and rebounds.

“She can slow the game down and make adjustments immediately in the course of the game,” Kilburn-Steveskey said. “Some people are positional rebounders and some just have a nose for the ball. That’s the way she is. She goes for the ball and that’s an innate skill. That tenacity helps you stay in ballgames and helps you win.

“She’s quiet and doesn’t have to be the center of attention. I like to say she has a good poker face in that you can’t guess what she’s thinking. But off the court and in the right moments, she can be funny, too.”

While Durant is close with the freshmen class that includes Askin, Aleana Leon and Stephana Oramas, the upperclassmen have also helped in the transition to playing for the Pride.

“Everyone looks out for each other, but especially Dee Thomas-Palmer and Sydni Epps have been a big help,” Durant said. “Sydni helps if I’m feeling down at practice. I know I can always count on her.”

Assessing the positional dynamics of a court plays into Durant’s potential post-basketball career. A forensic science major, she is taking a chemistry class (as well as a lab), a pre-calculus class and an introduction to forensic science in her first full-time semester on a college campus.