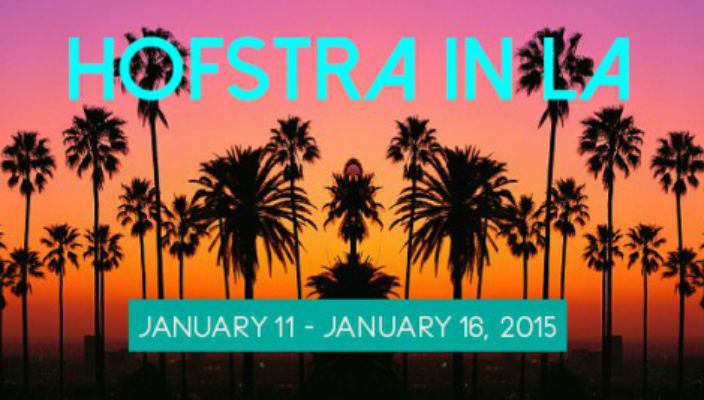 The Lawrence Herbert School of Communication is launching the “Hofstra in L.A.” program next month, a week-long series of events designed to connect students with internship and career opportunities in the heart of the West Coast’s entertainment industry.

Twelve students will spend Jan. 11 to 16, 2015 traveling around Los Angeles, where they will meet with Hofstra alumni and other industry leaders in fields such as television, film, radio, publicity, and arts and entertainment journalism.

More than a dozen meetings and activities are scheduled with executives including seasoned veterans Mark Bracco ’92, (executive vice president at Dick Clark Productions) and Jo Sharon ’98 (senior vice president of development at Magical Elves, the production house behind Top Chef), as well as with recent graduates Marcus Vanderburg ’08, an editor at Yahoo! Sports, celebrity blogger Micah Jesse ’09, and Kieran Valla ’06, a former fellow at the American Film Institute. Students will also meet with Jason Schrift ’92, co-executive producer of Jimmy Kimmel Live, and attend a taping of the show.   The week ends with a reception, co-sponsored by Hofstra’s Office of Admission, at the Directors Guild of America  where Herbert School Professor Dennis Mazzocco is a member of the board of directors.

The 12 participating students are all communication majors in their junior or senior year, and were selected from a pool of 53 applicants on the basis of good academic standing, faculty references, and an application. They are:

Herbert School Assistant Dean Adria Marlowe and Associate Professor of Radio, Television, Film Peter Gershon will accompany the students on the trip, and filmmaker Ben Mehlman ’10 will serve as the Hofstra in LA regional assistant.

The costs of the program per student, $1,250, were offset through support from the Herbert School Advisory Council, alumni, and other benefactors.  Four full scholarships were also provided by Hofstra alumni.