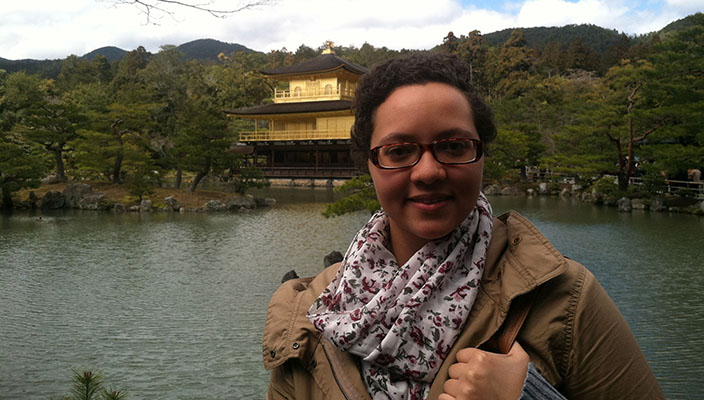 Naomi Gunkel, a senior at Hofstra University from Doylestown, PA, has been inducted into the Japanese National Honor Society (JNHS), which “recognizes and encourages achievement and excellence in the study of the Japanese language.” Naomi, who has a double major in Asian Studies and Publishing Studies, spent the spring of her junior year in Tokyo, where she took classes and held an internship at the global presentation firm PechaKucha. Now, back at Hofstra, she is completing her studies, working as a peer teacher for an elementary Japanese language class and interning at the Liza Dawson Literary Agency in New York City. She is graduating a semester early on December 21.

Dr. Patricia Welch, chair of Hofstra’s Department of Comparative Languages and Literature, nominated Naomi for induction into the JNHS. “Naomi is very deserving of this award,” Dr. Welch says. “She has been studying Japanese since her first year at Hofstra and has made great progress in all four language areas [listening, speaking, reading and writing].”

The National Japanese Honor Society (NJHS) is administered by the American Association of Teachers of Japanese and membership is recognized as a national achievement. Naomi is now one of more than 800 college and university students to have been inducted into JNHS since its establishment in 2007.

Naomi has had an international mindset for most of her young life. Throughout high school she studied German and participated in several study abroad and student exchange programs. During her freshman year at Hofstra she embarked on the University’s January program to London. She has also been to Italy. She says she had always been interested in Japanese culture, but there were no offerings in high school. “It was the first thing I signed up for when entering Hofstra. I was lucky enough to have taken Japanese language and Asian Studies classes with Professor [Patricia] Welch, Professor [Mari] Fujimoto, and Professor [Yoshie] Takahashi, all of whom did a wonderful job at making the language easy and fun to learn.”

By the time Naomi embarked for her study abroad opportunity in Japan, she had taken five semesters worth of language classes. “This gave me adequate skills to make navigating the country relatively easy and worry-free. I felt comfortable enough with my grasp of the language to speak with local people and learn things I would never have otherwise.”

Hofstra facilitated Naomi’s enrollment in the Japanese program, offered by Temple University’s Tokyo campus. She stayed at the Kitazono Women’s Dormitory, which provides single rooms with a bed, bathroom, and kitchenette, as well as a walk-out balcony. Naomi says, “The dorm offered several programs to help socialize newcomers, and I really enjoyed participating in two pizza socials and an Ikebana (flower-arranging) class, where I got to meet some of the local students of Tokyo. The dorm was conveniently located, and was an easy walk away from the subway system and a local shopping district, where I could get any food and school and living supplies for a good price.” Naomi stayed in regular touch with her Hofstra advisors to make sure all of her credits earned abroad would transfer.

At her PechaKucha internship, Naomi edited and uploaded videos to their website and YouTube. The internship also made her eligible to receive financial aid in the form of the Freeman Foundation East Asia Internship Program Scholarship, which helps recipients defray the cost of travel to Asia and expenses incurred during the internship. Between classes and work, Naomi still found time to travel the country and work as a volunteer, teaching English to kindergartners.

Her experience in Tokyo was extremely positive and her transition was very smooth. “Though I had traveled a lot previously, the culture in Japan is like none other I had experienced before. Thanks to my academic and personal research, I was prepared for most of the things I saw and did that differed from the way things are done in the US.”

When asked what she misses most about Japan, she says, “I especially miss the cuisine. Being adventurous, I tried any food that was offered to me. There was a local Taiyaki [Japanese pastry] shop down the street from the dorm that opened at the same time that I moved in, and I became friends with the owners because I went there so often. I also miss the efficiency of the subway system, though during commuting time, the trains would get incredibly crowded! Finally, I miss all of the people I met there, though I definitely hope to go back again.”

Now that she is gearing up for graduation, Naomi is planning to successfully channel her proficiency in Japanese and publishing studies to a career. “Early on, my ideal career was to be a translator for manga [Japanese comics]. After becoming more informed about the publishing industry, however, I decided it would be best to start working in entry-level editorial positions while keeping an eye out for any job openings with manga publishers.

“Depending on how things go, I may later pursue a master’s in library sciences, where my knowledge and interest in Asian history and culture would come into play, or explore the publishing industry in Japan, where my Japanese language skills would benefit me.”