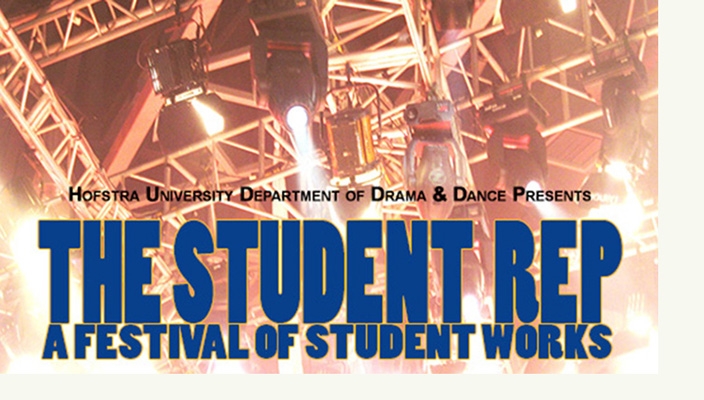 Hofstra University’s Department of Drama and Dance is presenting The Student Rep: A Festival of Student Works in the Black Box Theater, New Academic Building, Friday-Monday, December 5-8, 2014. These one-act performances are presented by current Hofstra University Drama and Dance students and some are the capstone projects or senior theses of the producing students.The Student Rep performances are:

Tony Kushner’s Slavs!: Thinking About the Longstanding Problems of Virtue and Happiness
Directed and produced by Hofstra senior Tanner Alvarez.
Slavs! is a rambunctious drama-comedy about the demise of the USSR and its rebirth as a collection of independent states.

The Last Five Years, with book and music by Jason Robert Brown
Produced by Hofstra senior Anne Holmes.
This play examines a five-year relationship between Jamie Wellerstein, a rising novelist, and Cathy Hiatt, a struggling actress. While Jamie begins his story at their first encounter, Cathy’s narrative is told  backwards, from the end of their marriage to the beginning.

MoVoM offers students opportunities to present their choreographic work on throughout the semester for the dance students and faculty, culminating with this formal performance at the end of each term.

Admission for all Student Rep performances is free. Any questions can be directed to the John Cranford Adams Playhouse Box Office at (516) 463-6644.