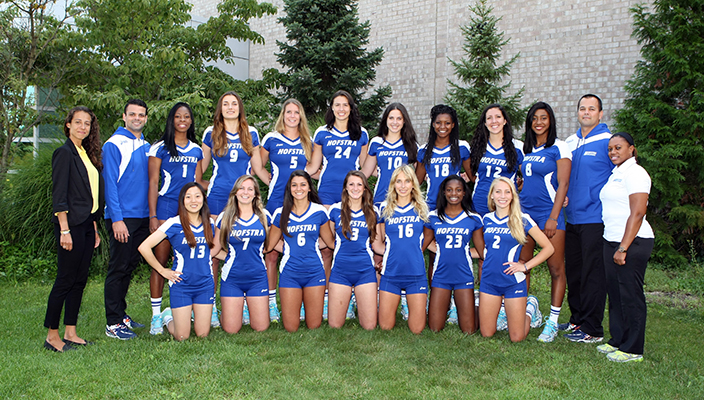 The Cornhuskers are the No. 14 overall seed in the NCAA Tournament and ranked No. 11 in the latest AVCA Division I Coaches Top-25 Poll released Monday.The first round match will be played at the Bob Devaney Sports Center (capacity 7,907) on the campus of Nebraska with the other contest in Lincoln pitting Kansas State against Utah at 4:30 p.m. local time.One of, if not, the best college volleyball environment in the entire nation, Nebraska averages a nation’s best 8,266 people in attendance per match in 2014. This total is even more impressive when you consider it leads second place in attendance (Hawaii) by 1,909 per match. The winners of the two first round matches will face-off at 7 p.m. Saturday for a spot in the Seattle Regional on December 12-13. It has been a magical season for the Hofstra Volleyball program as the squad will take its 28-5 overall record into the NCAA Tournament. It is the most wins for the team since the 1989 squad won 35 matches. The Pride captured their third Colonial Athletic Association (CAA) title with a 3-2 win over Charleston on November 23 and in the process advanced to the NCAA Tournament. This season marks Hofstra’s eighth NCAA Tournament appearance as previously Hofstra has advanced in 1995, 1996, 1997, 1999, 2000, 2006 and 2012. The 2006 team earned the program’s first-ever win in NCAA Tournament play with a 3-2 win over Cornell in the first round. It is the second-ever match-up with the Cornhuskers in volleyball. On September 16, 1989, Nebraska defeated Hofstra, 3-1, at the Minnesota/Reebok Classic.CAA Player of the Year Kelsie Wills leads an experienced group of Hofstra players into the first round match against the Huskers. The senior outside hitter leads the Pride with 498 kills and 4.26 kills per set, while ranking second with 30 service aces, third with 308 digs and fourth with 67 blocks. Wills is not alone, though, as senior middle blocker Nuria Lopes da Silva was a first team All-CAA honoree this season and sophomore setter Hannah Klemm picked up CAA Setter of the Year honors and second team All-CAA accolades. Klemm is one of the nation’s top setters as she ranks sixth in the nation with 11.73 assists per set for a total of 1,361 assists this season. She also has totaled 225 digs and 60 blocks. Lopes da Silva ranks second on the team with 343 kills and leads the way with 129 blocks. Nebraska is 20-9 this season and compiled a 14-6 record in Big 10 Conference play. Kadie Rolfzen leads the Cornhuskers with 353 kills and is second with 259 digs. Mary Pollmiller leads Nebraska with 1,048 assists and also chips in with 185 digs. Justine Wong-Orantes has picked up a team-high 397 digs this season. The Huskers dropped their final two matches of the regular season to #11 Illinois and #4 Penn State, but prior to that they had won eight straight contests. Kansas State is 22-8 in 2014-15 and put together a 9-7 mark in the Big 12 Conference. Kylee Zumbach leads KSU with 406 kills, while Katie Brand has 1,249 assists, 308 digs and 101 blocks this season. The Wildcats lost their last two matches heading into the NCAA Tournament to Oklahoma and West Virginia. Utah will bring a 19-12 overall record into the NCAA Tournament and went 9-11 in Pac-12 Conference play this season. Chelsey Schofield leads the Utes with 345 kills, while Shelby Dalton follows closely behind with 316. Lea Adolph leads Utah with 346 digs, while Kalee Kirby and Kendall Cygan share the setting duties with 666 and 508 assists, respectively. The Pride is 0-1 all-time against the Wildcats and the Utes. The match-up against Utah occurred during the 1993 National Invitational Volleyball Championship on December 2. Utah earned a four-set win over Hofstra in the postseason tournament. In 2011 Hofstra faced Kansas State at the Dr. Mary Jo Wynn Invitational in Springfield, Missouri, on September 9 and dropped a four-set contest. Hofstra did not share any common opponents this season with Nebraska, Kansas State or Utah.