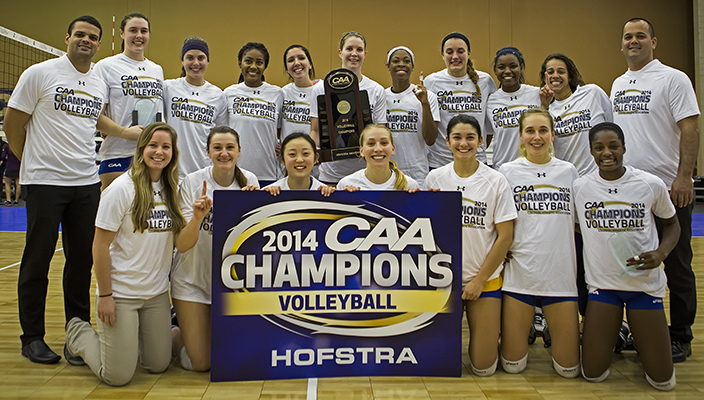 Senior Kelsie Wills recorded a match-high 26 kills, senior Emily Burke added 18 kills and sophomore Hannah Klemm posted a career-high 63 assists to lead the Hofstra Volleyball team to the 2014 Colonial Athletic Association Volleyball Championship with a five-set victory over the top-seed Cougars of the College of Charleston Sunday afternoon. Set scores were 26-24, 27-25, 19-25, 24-26 and 15-8.

Hofstra improved to 28-5 with the win, its most wins since recording 35 vic tories during the 1989 season. Charleston falls to 23-10 with the loss. Hofstra, which captured their second CAA title in the last three seasons after winning in 2012 and their third overall in the conference, will advance to the NCAA Championship that begins in two weeks. The announcement of the 64-team Championship bracket will be announced on Sunday, November 30.Burke was named the CAA Championship Most Outstanding Player while Wills and fellow senior Nuria Lopes da Silva were also named to the All-Championship team. Burke recorded a .400 (18-6-30) attack percentage and added four block assists. Wills hit .302 (26-7-63) and had 10 digs. Lopes da Silva had 17 kills and a .279 (17-5-43) attack percentage with six block assists. Klemm’s 63 assists topped her previous mark of 53 set against Connecticut earlier this season. The Pride had a .270 (74-24-185) attack percentage.The College of Charleston had three players in double-figure kills led by junior Melissa Morello with 16 kills and senior Sloane White with 14 kills. Senior Cara Howley added 12 kills while classmate Kallie McKown had 24 assists and 18 digs. The Cougars had a .209 (62-26-172) attack percentage.The first set was as close as expected with nine ties and six lead changes. After trailing by five at 16-11, the Pride scored nine of the next 12 points to take a 20-19 lead on a Lopes da Silva kill. Emily Burke posted three kills and a block assist in the Hofstra rally. After exchanging lead changes at 21, 22, and 23, the Cougars took a 24-23 lead on a block by White and Warren. But Kelsie Wills followed with a kill, the Cougars had an attack error and Lopes da Silva ended the set with a service ace for the 26-26 victory. Wills had six kills in the set for the Pride who posted a .268 (15-4-41) attack percentage.The second set had five ties but only two lead changes. After the Cougars jumped out to a 10-3 lead, Hofstra recorded a 12-4 run to take a 15-14 lead. MacKenzie Cooler tied the set at 15 with a kill before Hofstra tallied nine of the next 14 points to build a 24-20 lead after a Wills kill. But CofC rallied to tie the match at 24-all. After the two teams exchanged kills by Burke and CofC sophomore Maddie Hills, Lopes da Silva  had a kill and the Pride closed out the set with block assists by Lopes da Silva (5 kills) and Veronika  Kostova (3 kills) for the 27-25 win. Burke also had three kills in the setThe two teams split the first 22 points in the third set before the Cougars tallied six consecutive points on the way to a 25-19 victory. The Pride hit just .133 (15-9-45) while Charleston hit at a .333 (15-3-36) clip with Morello and White each posting four kills. Wills and Burke each had five kills in the third set for the Pride.The fourth set was another battle that ended in controversy. In a game that had 10 ties and five lead changes, the score was tied at 21-all after a Cougar ball handling error. After Grace Rebarchak had a kill to give Charleston the lead, the Pride rattled off three kills by Wills to take a 24-22 lead. But Howley added two kills and a block assist, got a point on a penalty and a Hofstra attack error for the 26-24 victory to send the match into the fifth and final set. Morello had five kills in the set while Howley and White added four for the Cougars who hit .286 in the set. Wills had eight kills while Lopes added five as the Pride posted a .325 attack percentage. Klemm had 17 assists.Hofstra, which is now 2-2 in five-set matches this season, split the first four points before the Pride tallied six of the next seven points to take an 8-3 lead. Lopes da Silva had two kills and two block assists in the spurt. After Charleston closed to within two with three kills by Howley, Hofstra scored the next four, including three kills by Wills, to open up a 12-6 advantage. The two teams split the next four points before Burke’s kill gave the Pride the 15-8 win and the CAA Championship.The NCAA Tournament appearance is the eighth in program history as Hofstra has previously advanced to the tournament in 1995, 1996, 1997, 1999, 2000, 2006 and 2012.