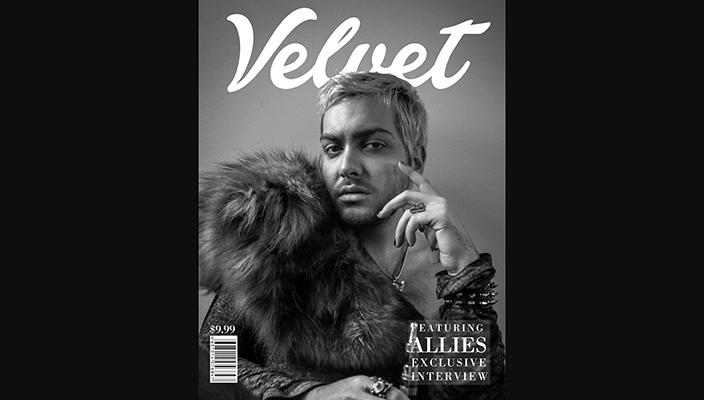 Velvet, a 40-page magazine edited and photographed by Hofstra senior Ricky Michiels, will have a publication party on Friday, November 14, at 7:30 p.m. at the Plaza Rooms in the Mack Student Center. Velvet is Michiels’ senior project, and he promises the event will “have the feel of a real magazine release party.”

Michiels, a fine arts major who hails from Seaford, NY, is a member of the academic club, Creative Genius, which is hosting the party. Housed within the Department of Fine Arts, Design, Art History, Creative Genius encourages students to collaborate on art and design projects. Michiels wanted to go in a unique direction with his senior project, coming up with the idea of a magazine, for which he would write and assign articles, come up with a design, and plan a publication event.

Copies of Velvet will be distributed at the party. The décor will feature enlarged and projected pages and photographs. The party will also feature a performance by the local alternative rock band, Allies, who are the magazine’s cover story. Michiels, who photographed the group, says asking them to attend was a no-brainer. “I’m doing it for them [having them perform] as much as I am for me, because they deserve the exposure,” Michiels says.

Over the course of the semester, Michiels enjoyed working in the photo studio with Allies and other magazine subjects, but he has come to prefer the freedom of working on location. He says he finds inspiration in the energy of his subjects and the fast-paced nature of photography.

Ironically, Michiels was indifferent to the art of photography until he took a basic class during his junior year. Since then, it’s been hard for him to put the camera down. For his major Michiels has a concentration in design and had become used to working in front of a computer screen. He found that his favorite part of making the magazine was being able to meet and interact with people. When it comes to medium preference between graphic design and photography, he says he no longer has one. “I like both equally. I have my days where I prefer one or the other, but I would say they pretty much go hand in hand.” With Velvet, he appreciates that he has been able to bring all of his technical and artistic skills together and create a complex project that is truly his own.

Admission for the Velvet launch party is free and open to the public.