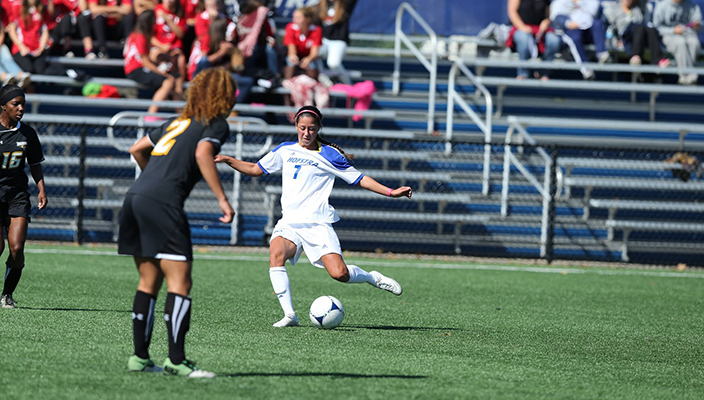 Brookline, Mass. – Sophomore midfielder Emily Agudelo blasted a 45-yard shot off a free kick to break a deadlock in the 81st minute to lift Hofstra to a 4-3 win over James Madison in the Colonial Athletic Association Championship semifinals on Friday afternoon from Northeastern’s Parsons Field. Sunday’s 1 p.m. championship game will air in the New York area on SNY.
Box Score / Photo Gallery / Archived Video / Postgame Interviews/Highlights
Agudelo’s second goal of the season gave Hofstra its third lead of the game and helped improve the third-seeded Pride to 13-6-1. Senior forward Sam Scolarici scored two goals and tallied an assist while CAA Player of the Year Leah Galton also scored to send Hofstra to Sunday’s CAA championship game at 1 p.m. against the winner of the Northeastern-William & Mary game tonight. That game will be televised by the American Sports Network that can be seen locally on SportsNet New York (SNY).Ashley Herndon scored two goals for the second-seeded Dukes, but JMU ended its season 12-8. Hofstra reached the CAA championship game for the second time in three seasons and for the sixth time in program history. The Pride won the title in 2012 and has made the finals three times in five seasons with appearances in 2010, 2012 and this season.Galton scored off a breakaway in the 64th minute to put Hofstra ahead, 3-2. Senior Lulu Echeverry laced a though-ball that sprung Galton for the one-on-one goal. But Herndon tied the game at 3 less than five minutes later when she banked Katie Hyland’s centering pass off the left post and in for the 70th-minute goal.Scolarici registered her fifth multi-goal game this season and the 11th of career with two first-half goals and picked up the second assist on Galton’s game-winner. Galton and Scolarici are now tied for the CAA lead in goals with 17 and trail the program’s single-season record by one.Sophomore goalkeeper Friederike Mehring made six saves, including three in the second half.Before Agudelo’s game-winner, junior Jeannine Molleda, who is coming off a first-team All-CAA selection, fired a head-on shot from 20 yards out that Ellen Forrest saved with almost 13 minutes remaining in regulation. Scolarici gave Hofstra another good chance when her touch pass gave Galton another breakaway chance. Galton’s shot sailed just over the crossbar to keep the game knotted at 3.Both teams aggressively crashed the box in the game’s first 10 minutes and scored off rebounds. Herndon followed Allison Bortell’s blocked shot and scored to the low left-side 5:13 into the game. Herndon, who came in from the right flank, then added her sixth goal in the second half.Scolarici erased JMU’s lead just 2:11 later following Herndon’s first goal. Her initial shot hit the left post but she stayed with the play to score from nearly 10 yards out for her eighth-minute equalizer.Galton, who earned her second consecutive CAA Player of the Year award coming into the semifinals, set up Hofstra’s second goal when she was taken down by JMU defender Madyson Brown just inside the box in the 19th minute. No card was issued, but a penalty kick was award as Galton gained a step on the defender and was gearing up for a scoring chance.Scolarici took the penalty kick and converted the chance when Ellen Forrest dived to her left and Scolarici by shooting it to the other direction. Scolarici improved to 2-for-3 on spot kicks this season for a 2-1 Hofstra lead. It was the second straight year Scolarici scored off a penalty kick against JMU in the CAA Tournament, as she also converted a chance at JMU in the 2013 semifinals that the Dukes won.Hyland scored from nearly 30 yards out to tie the score at 2 in the 31st minute. Hyland took Brown’s pass and beat Mehring high from long-range for her fifth goal.Top-seeded Northeastern faces fourth-seeded William & Mary in the other semifinal matchup that starts at 6 p.m.