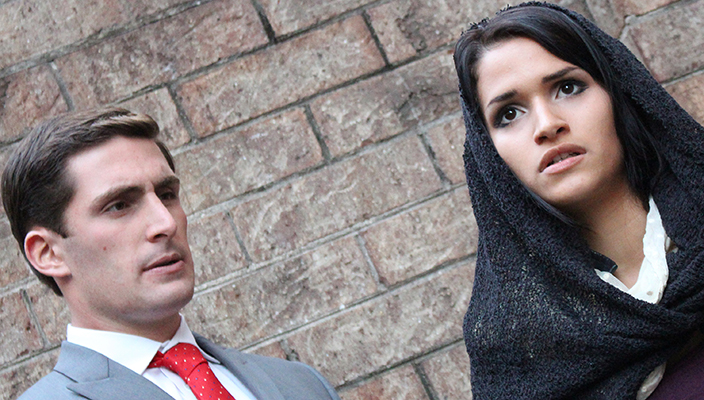 The Burial at Thebes, translated by Nobel-prize winning poet Seamus Heaney, will be performed at Hofstra University’s Black Box Theater in the New Academic Building from November 7-16, 2014.

This production, directed by Hofstra Professor Cindy Rosenthal, is an accessible and timeless version of Sophocles’ Antigone, the mythic story of a young woman who dares to stand up for her principles and speak out against the authority of the state. Her two brothers, Eteocles and Polyneices, are dead – the former for defending Thebes, the latter for attacking it. Creon, the ruler, will give Eteocles a hero’s burial and decrees that Polyneices will be left unburied to rot, because he was a traitor to the state. Antigone sees this harsh treatment of Polyneices as morally wrong and buries him on her own. The play raises questions still relevant in our modern day, including state law vs. moral obligation and justice.

Antigone is hailed as one of the most enduring texts in the Western canon. Heaney’s 2004 translation, written as the war in Iraq was underway, was praised for being “eerily relevant” and “the right story to be telling now.” 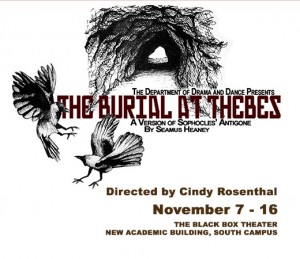 In her director’s note, Professor Rosenthal writes, “Reading Heaney’s words a decade later, I wonder – where have we come? Has much changed? The fiery and fatal conflicts between the Antigones in our contemporary world and the Creons rage on – whether in the Ukraine, Iraq, Gaza – or Ferguson, Missouri. Individuals continue to put their bodies on the line, to stand up and oppose State violence with violence of their own. In producing The Burial of Thebes, we aim to celebrate Heaney’s beautiful translation of Sophocles’ 5th century BC master-work, and to bring into focus the important, difficult questions inherent in the play for Hofstra audiences today.”

Show times for The Burial at Thebes are Friday, November 7 and 14, at 8 p.m., Saturday, November 8 and 15, at 8 p.m., Sunday, November 9 and 16, at 2 p.m., and Thursday, November 13, at 8 p.m. Tickets are $10, $8 for senior citizens (over 65) or matriculated non-Hofstra student with ID. Hofstra community members may receive up to two free tickets upon presentation of a valid HofstraCard.

Tickets are available for purchase at the John Cranford Adams Box Office at (516) 463-6644, Monday through Friday, 11:15 a.m.-3:45 p.m. They may also be purchased at the Black Box Theater, starting 90 minutes before each performance.

For more information on Hofstra’s Department of Drama and Dance, visit www.hofstra.edu/drama-dance.