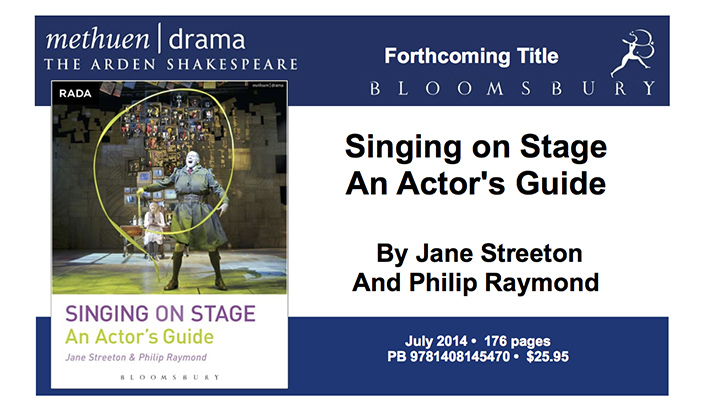 Hofstra music students concentrating in vocal performance and students from drama and other programs with a minor in musical theater have a coveted opportunity this Friday, November 7, to participate in a master class with author, performer and teacher Jane Streeton, who has served for more than 30 years on the faculty of the Royal Academy of Dramatic Art in London (RADA). She is also the co-author of a new book, Singing On Stage: An Actor’s Guide.

In “Singing On Stage: Master Class,” Ms. Streeton will work closely with a small group of students who aspire to improve their singing and acting. Those in awe of Broadway musical actors appreciate that being able to sing and act in the same performance is a very difficult talent to master. Adjunct Associate Professor of Music Tammy Hensrud, who is coordinating this event, explains that actors who can successfully perform in this capacity “have learned to free themselves from tensions that can mar a successful performance. They learn how to communicate the text through dramatic skills as well as the music.”

There is a concerted amount of preparation going into this master class. The students are coming in with certain selections from a broad repertoire of musical theater prepared to work on; Ms. Streeton is being briefed on the students’ academic and performing backgrounds. While the class will be focused on the interaction between Ms. Streeton and the students, an audience is welcome to attend and sit in on what promises to be an enlightening behind-the-scenes look at training for a career in musical acting.

A highly experienced performer and teacher, Ms. Streeton is an international soprano soloist in opera and concert. In addition to her work at RADA, she has worked as a singing coach and vocal advisor for numerous films, the BBC, West End musicals, the Royal Shakespeare Company, the National Theatre and Shakespeare’s Globe.

“Singing On Stage” will take place at The Helene Fortunoff Theater from 2:20-5 p.m. Admission is free and open to the public. Advance RSVP is available for this event.

“The Burial at Thebes” Raises Questions of Morality Still Relevant Today
Dr. Julie Byrne: there is a “priority on unity” in Roman Catholicism