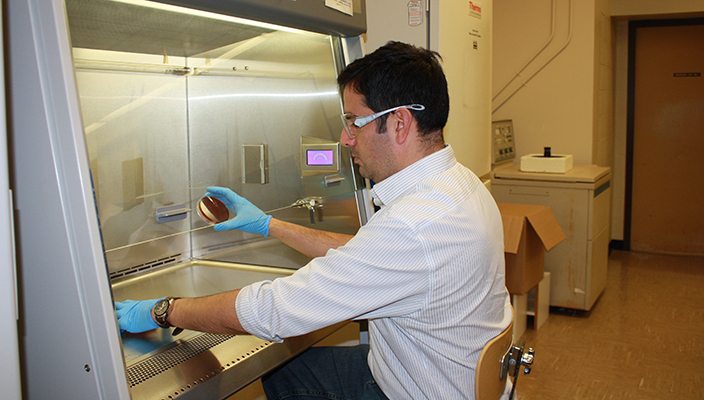 Earlier this fall, the Biology Department received a -80 freezer, several thermocyclers for amplifying DNA, a robotic liquids handler, and a microscope programmed to find dividing cells and do karyotytpes. This generous donation from Acupath Laboratories, Inc., in Plainview, Long Island, was facilitated by Michael Matthews, who earned an MS degree in Biology at Hofstra in 2008.

Acupath is a national specialty medical laboratory, specializing in anatomic pathology, molecular pathology, dermatopathology, cytopathology, and oncology.  Michael is director of the Acupath Molecular Pathology Department, specializing in cytogenetics, Fuorescence in Situ Hybridization (F.I.S.H), and In-situ Hybridization (ISH). He is also the technical liaison to all of Acupath’s clientele, providing explanations on the testing his department and laboratory performs.

Michael has been with Acupath since 2004.

How did your time here as a student in Hofstra’s biology dept. help you in your professional life?

The Hofstra University experience helped me greatly with my career.  When I first came to Acupath Laboratories, I could not qualify as a supervisor since I only had my undergraduate degree. The Hofstra University program was laid out in such a way that I was able to still work full time, while attending classes in the evening. Hofstra’s flexible program allowed me to work on my thesis at my own lab, and the professors at Hofstra always were available to guide me in all I did.  Once I graduated, the doors to promotion quickly opened up for me, and through the years I have been promoted six times. Had I not had the education I received at Hofstra, none of this would have been possible.

Are there any professors who really stood out to you at the time as mentors?

Dr. Dorothy Pumo [Professor Emerita of Biology] always challenged me to be a better student and a scientist.  We spent many hours together, since she taught four of my graduate classes. Her biggest influence was when we did an independent study together on Molecular Pathology, and the JAK2 Pathway.  Dr. Pumo always understood what my goals were and helped me stay on the path to completing my degree.

As my primary thesis advisor, Dr. Laura Vallier [Associate Professor of Biology] made sure my material was scientifically correct and helped me stay focused. Dr. Vallier always respected my decisions on my project, and even when we agreed to disagree she never took a hard stance on anything.  Dr. Vallier treated me like a colleague and not just as a student. Her dedication to my thesis project and getting it completed in a timely manner was all I could have asked for.

Do you have any advice to current students who are interested in the sciences but not sure what path to follow?

I think it is important for students to really take a chance – explore scientific websites, ask professors about fields where their degree may be an asset, and be bold and write to laboratory managers and directors to solicit positions.

The laboratory field is expanding, and there are numerous opportunities for students with biology degrees to work with highly sensitive materials. As a director, I know that those of us who are in positions to hire sometimes get so involved with work that it can take weeks to actually sort through resumes. I have hired numerous employees in my tenure who have appeared a tad more interested than other candidates, just because they reached out initially with an introductory email.

Candidates who are not sure what they want to do with their degree should also consider asking hiring managers if there are short internships available so they can gain some experience and familiarity with the scientific community.

Top image: Dr. Javier A. Izquierdo works on a project using one of the donated safety hoods.