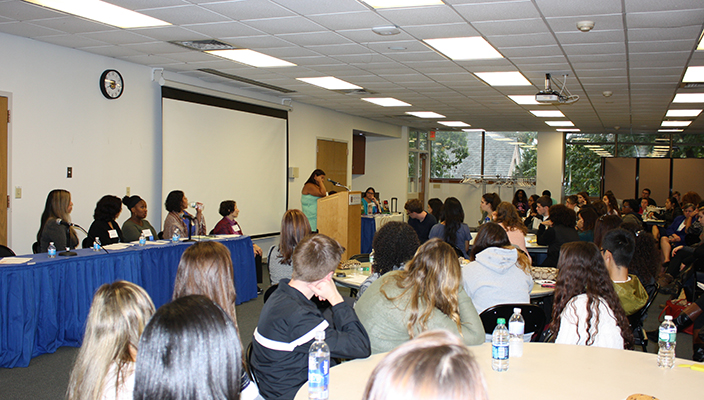 The October 21st conference, Domestic Violence: Dare to Speak Its Name – Communities Respond to Intimate Partner Abuse, featured a very moving panel led by participants of the Herstory Writers Workshop, who are themselves survivors of domestic violence. The conference was presented by the Criminology Program in the Sociology Department, in conjunction with Herstory.

Each of panelists had a different perspective on domestic violence to share. The first essay, “First Night of Freedom” read by a Herstory intern, was written by one of the first contributors to the Herstory program, who has since changed her name and relocated. The essay was a heartbreaking account of her escape from a life of abuse with her six children.

This was followed by “If No One Will Talk” by Adeline Acevedo, who as a teenager was brutally raped. She painfully recounted how she allowed the police to photograph her many scars, hoping that cooperating with authorities would protect other young girls from the predator who nearly murdered her. She also shared how she feared her mother’s reaction, worrying she would be blamed for what happened. 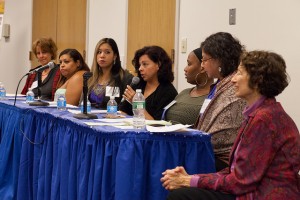 In “Another Generation,” survivor Susan Perretti talked about the abuse she endured many years from her husband – until at the age of 51 she finally divorced him. She revealed that she grew up in a home where her mother was abused. Having recognized that domestic violence can be a vicious cycle, she also shared her deep love and worry for her daughter and unborn grandchild.

Other participants in the panel included Marllene Lopez, who presented “Letting Go” and Lorenna Marroquin, whose essay was titled “It Was a Night Like No Other.”

Founded in 1996, Herstory endeavors to give voice to isolated and vulnerable populations on Long Island; among them – women in prison, in homeless shelters, women on disability and welfare, domestic workers, Asian, Hispanic and Caribbean immigrants, pregnant and parenting teens. Erika Duncan, founder and executive director of Herstory, explained at the start of the panel that organization began as a one-week program for survivors of domestic and political violence. “When you feel that the world has turned against you,” she said, “it’s hard to have a voice.” The approach, she explained, is “dare to care” – give people a chance to be in the same shoes as these women who have endured so much. For these survivors “discovering that they have a voice and something to say, turns them into activists,” Ms. Duncan said.

Other readers on this panel of survivors and professionals in other conference events tried to shed light on why people commit acts of domestic violence, why their partners endure it, and reaction from community, cultural and corporate entities. In addition to speakers from Hofstra University and Herstory, there were experts from New York University, the New York State Department of Corrections, the Nassau County District Attorney’s Office, the Safe Center of Long Island, SEPA Mujer, and the Domestic Harmony Foundation.