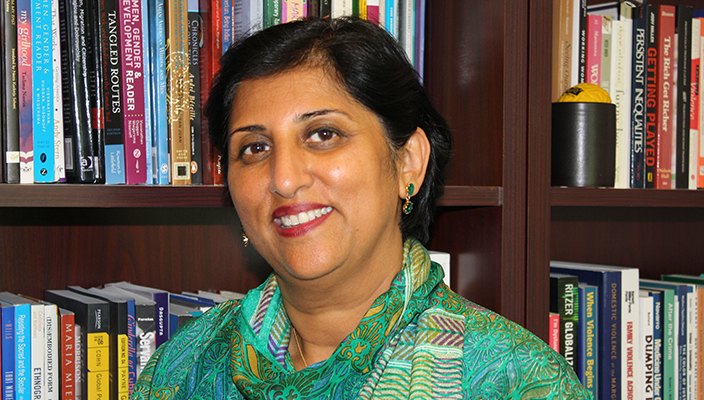 Dr. Margaret Abraham, sociology professor and special advisor to the provost on diversity initiatives, has been elected president of the International Sociological Association (ISA) for a 2014-2018 term. Founded in 1949 under the auspices of UNESCO, ISA is a non-profit association for scientific purposes.  Its function is to represent sociologists everywhere, regardless of their school of thought, scientific approaches or ideological opinion. ISA’s membership spans 167 countries.

Dr. Abraham previously served as ISA vice president of research and as the American Sociological Association representative (ASA) to the ISA (2010-2014). Her teaching and research interests include gender, ethnicity, globalization, migration and domestic violence. She is, as described by Hofstra Provost and Senior Vice President for Academic Affairs Herman A. Berliner, “the consummate professional who excels as a teacher, a scholar, a university citizen, and an international leader in her discipline. … On every level, she is an exemplary and extraordinary faculty member.”

Evangelia Tastsoglou, Ph.D., past president of ISA Research Committee on Women in Society and professor of sociology and criminology at Saint Mary’s University in Halifax, Canada, says Dr. Abraham “has a natural talent for inspiring people and bringing out the best in them. … She knows how to work across differences and to turn challenges into opportunities for learning and growth. Her feminist ethics and practices ensure a leadership inspired by inclusivity, equality and justice.”

Bandana Purkayastha, Ph.D., professor and chair of the Sociology Department, University of Connecticut, and the American Sociological Association representative to the ISA, notes that Dr. Abraham’s election to ISA president breaks color, as well as gender, barriers.

“She is the second woman in the history of ISA to reach these heights … She is certainly the first ‘scholar-of-color’ from the US to achieve this honor, Dr. Purkayastha said. “Within the ISA, Professor Abraham has been a leader in creating some of the structures – including digital spaces – that promote deeper engagement between sociologists from different countries.  I look forward to her leadership of this truly global organization.”

Dr. Cynthia Bogard, chair, Department of Sociology at Hofstra, said Dr. Abraham “… thinks globally about sociology and its relevance to policy and practice, she’s worked hard and successfully to increase interaction between scholars in different countries and continents, and she still finds time to mentor colleagues and students alike. Maggie’s vision of “action research” – research that directly contributes to social progress – makes her a wonderful choice for sociology’s most prominent global position.”

Another recent honor for Dr. Abraham was the 2013 Sociologists for Women in Society Feminist Activism Award for “exemplifying sociologists working for women in society.”  She also received the “Outstanding Community Advocate Award” by the Domestic Harmony Foundation of Long Island in Spring 2013 in recognition of her research and activism in the field of domestic violence in the South Asian Immigrant community.

Dr. Abraham has taught at Hofstra since 1990, and she served as chair of the sociology department from 2000-2003 and has also served as Director of Women Studies. Courses that she teaches include senior seminars on Violence Against Women; Globalization, Work and Citizenship; Women, Gender and Development; and Public Sociology. She has published in various journals including Gender & Society, Violence Against Women, Indian Journal of Gender Studies and Social Justice. She is the author of Speaking the Unspeakable: Marital Violence Among South Asian Immigrants in the United States (Rutgers University Press 2000), the first book on domestic violence within the South Asian diaspora in the United States. Speaking the Unspeakable won the American Sociological Association: Section on Asian and Asian America Outstanding Book Award in 2002. She also co-edited, Contours of Citizenship: Women, Diversity and the Practices of Citizenship published by Ashgate (Spring 2010); and Making a Difference: Linking Research and Action (Current Sociology Monograph: SAGE 2012). She is currently working on an edited volume under contract with SAGE on sociologists and social justice in the 21st Century.

Hofstra Professor of Sociology and Co-Director of the Center for Civic Engagement Gregory Maney explains Dr. Abraham’s impact on her colleagues. “She has been a mentor, role model, co-researcher, and trusted friend. Her active commitment to collaborative, action-oriented research with members of oppressed groups has helped to make public sociology a strong norm within our department.”

Dr. Liena Gurevich, associate professor of sociology and director of Hofstra’s criminology program, says Dr. Abraham “is representative of a true Renaissance personality with her exceptional abilities in teaching, research, mentoring, organizing and problem solving. In addition, she is a marvelous colleague, whose interactions with her peers and students are characterized by great deal of empathy and generosity.

Dr. Abraham has been involved in research and activism in the field of domestic violence in the South Asian immigrant community for over 20 years. She serves on the editorial boards of journals and has been an advisory board member and consultant on national projects related to issues on violence against women. She served on the Board of Directors of Sakhi for South Asian Women and the Asian Pacific Islander Coalition on HIV/AIDS (APICHA) and Westbury Friends School in Long Island, New York. She has been honored for her community action research by several organizations including Sakhi for South Asian Women, Apna Ghar in Chicago, Domestic Harmony Foundation, Indus Women Leaders, the Indian American Kerala Cultural and Civic Center, and the Office of the Executive, Nassau County, State of New York. Her work has been profiled and quoted in The New York Times, Chicago Tribune, Newsday, India Abroad, Malayalam Pathram, India Today, Indiathink.com, and Rip Rap: The Academic Book Program.