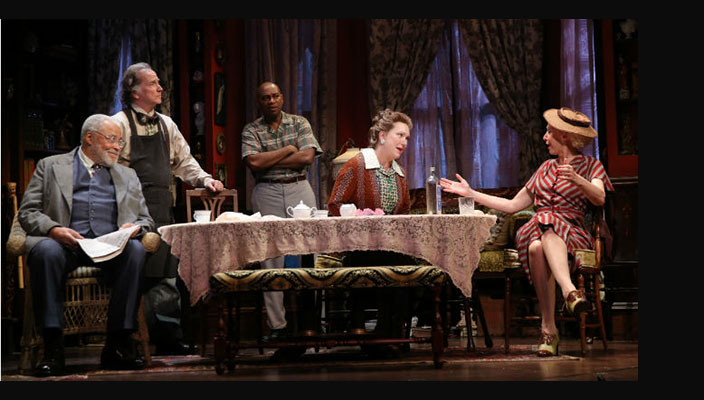 The play was written nearly 80 years ago, but the themes explored in “You Can’t Take It With You,” the Broadway revival starring Hofstra alum Julie Halston and stage and film star James Earl Jones, never get old.

“This was the original modern family,” said Halston, referring to the uproarious Sycamore family at the center of the show. “They are rather eccentric but very loving and that’s what the whole theme of the show is about. Ultimately, it’s about love.” The show has been in previews since August and opens at the Longacre Theatre on Sept. 28.

Armed with an award winning cast – Halston is a three-time Drama Desk nominee – the revival builds on the production’s past successes. The comedic play opened at the Booth Theater in 1936 and won the 1937 Pulitzer Prize for drama. It was adapted for film the following year and won the Academy Award for best picture and best director.

Halston plays Gay Wellington, an actress who is invited to dinner by playwright Penny Vanderhof Sycamore – played by Emmy and Golden Globe nominee Rose Byrne — to read over Penny’s latest play. Ms. Wellington has a tad too much to drink and passes out onto the living room couch after looking at the Grandpa Vanderhof’s — played by Jones — snakes.

Asked what it’s like working alongside James Earl Jones, Halston replied, “He is amazing. He is so generous. … He actually said to me, ‘I just love watching you.’ He’s an actor who just loves being part of a great play.”

Portraying an eccentric character is not a new role for Halston. She cut her teeth in theater with renowned playwright Charles Busch, with whom she helped found the now legendary Off-Broadway company Theatre-in-Limbo. She co-starred with Busch in many of the productions, including “Vampire Lesbians of Sodom,” which “really put us on the map,” Halston said.

“Even Bitsy Von Muffling in ‘Sex in the City’ was a bit of an eccentric character,” she said, referring to her recurring role in the series and subsequent movie. “She ended up marrying a gay man, Nathan Lane, and getting pregnant at the age of 49 … I’ve always played kind of eccentric characters, which I guess says something about me!” Halston quipped.

To be sure, Halston’s comedic roots have served her well. “Charles [Busch] was also very helpful in helping me go out on my own as a story teller and a stand-up,” she said. “I did a show called ‘Julie Halston’s Lifetime of Comedy’ that landed me a development deal with PBS. That’s how I got involved doing more TV and film and Broadway.”

Despite her busy Broadway schedule these days, Halston continues to do standup. She will be returning to New York’s Birdland Jazz Club on Monday nights – her only day off from “You Can’t Take It With You”—in December.

Halston, who received a BA in theater arts from Hofstra, credits former Professor Carol Sica with helping her realize her ambitions. Unlike many of her classmates who grew up in New York City and attended the High School for Performing Arts, Halston grew up on Long Island and attended a private Catholic High School. “I wouldn’t say I was shy because I’m not shy at all, but I was less skilled than they were. … But there was a theater teacher there, Carol Sica, who was actually was a Hofstra alum herself,” Halston said. “Carol Sica really sort of got on my train. She really encouraged me, and I think once I realized that I needed to really step up to the plate and once I got the encouragement to do that, I became very focused. … I cite Carol Sica as the one who really landed on me and said, ‘You could do this.’”

Decades later, Halston is still friendly with many of her Hofstra classmates. “I did a comedy gig recently at Gotham Comedy Club, and five of my Hofstra friends showed up,” she said. “They come to my one-woman shows at Birdland [and] they’re already talking about buying tickets for ‘You Can’t Take It with you.’ We all had a good time at Hofstra. The friends that I have are very, very important people to me.”

And as Halston gears up for the opening of “You Can’t Take It With You,” she pays tribute to another friend, Joan Rivers. “[Joan] saw almost everything I think I ever did, and she was always supportive and encouraging,” she said. “I do think every female funny lady in the world does owe Joan a great debt. … Eccentricity and ‘out there’ behavior is always going to be compelling. It’s what makes us human, so it’s always going to be part of the mix. I’m very blessed, I feel, that I can always be a character lady; it never gets old. Joan never got old, and hopefully I will never get old.”

Featured image: Julie Halston (right) appears on stage with fellow cast members during a preview of “You Can’t Take It With You.” Credit: Joan Marcus