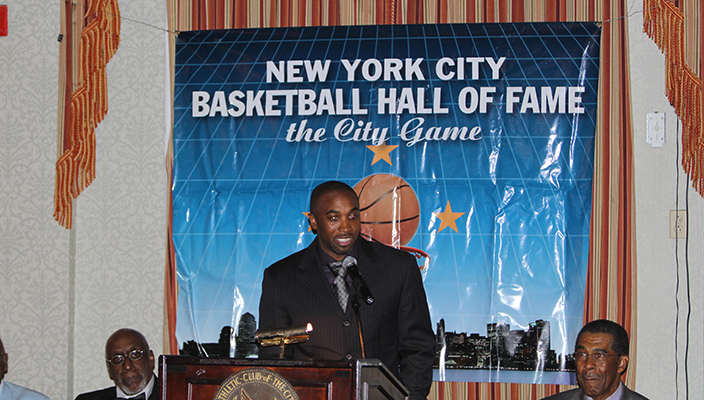 The ceremony took place at the New York Athletic Club and the organization inducted seven individuals and one team into the hall of fame.

Claxton, one of the all-time greats in the history of the Hofstra Basketball program, joined the Hofstra staff after spending the previous two seasons as a scout with the Golden State Warriors of the National Basketball Association (NBA).

Claxton graduated from Hofstra in 2000 as one of only six players in school history to score 2,000 career points (2,015). He also graduated as the program’s all-time leader in both assists (660) and steals (288), and was a two-time Player of the Year selection in the America East Conference (1998, 2000). He was also named the 2000 winner of the Haggerty Award, given to the top player in the Metropolitan New York area, after leading Hofstra to an America East Conference championship and its first NCAA Division I tournament berth in 23 years.

Claxton enjoyed a decade-long career in the NBA. He was a first round draft pick of the Philadelphia 76ers in 2000, and earned an NBA title as a member of the San Antonio Spurs in 2003, when he was on the floor in the fourth quarter of the decisive sixth game against the New Jersey Nets.

Claxton notched career-highs in points against Hartford and Maine as he poured in 40 points in back-to-back games in January of 1999. His high of 13 assists occurred twice, including against New Hampshire in 1998 and against Stony Brook during the 1998-99 campaign. Claxton totaled a career-best 11 rebounds versus Drexel in March of 1999.