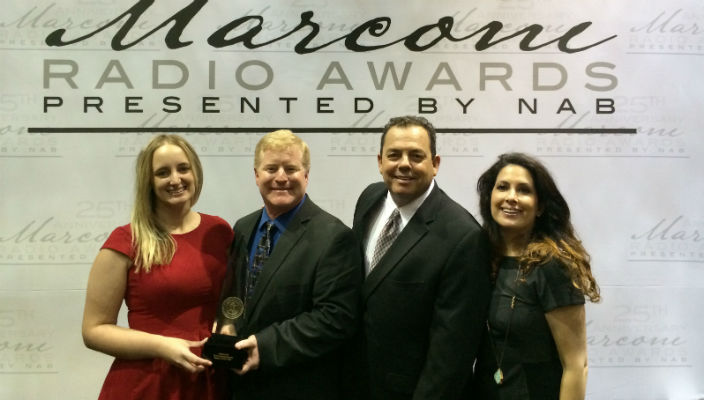 WRHU was one of five finalists up for the prize, which was announced last night at a ceremony in Indianapolis. The Marconi Awards, named after inventor and Nobel Prize winner Guglielmo Marconi, recognize stations and individuals for performance and excellence in 22 categories. This is the first year that the NAB is recognizing non-commercial stations.

On hand to accept the award on behalf of WRHU’s student staffers and faculty were Operations Manager John Mullen and Brianna Borresen, assistant news director and a student in the graduate program in journalism.

WRHU is Hofstra’s award-winning student-run radio station, with studios at the Lawrence Herbert School of Communication. Ranked as the best college radio station in the nation by Princeton Review, WRHU and its student reporters have won top honors from the New York State Associated Press Association, the Press Club of Long Island, the Society of Professional Journalists, and New York Women in Communications.