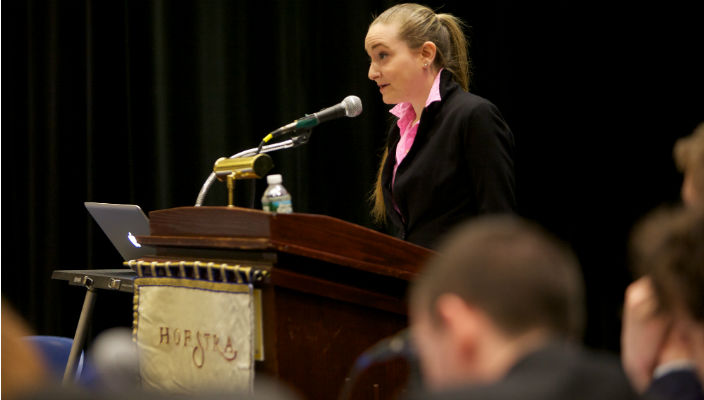 The Department of Rhetoric is launching a new Speech & Debate Team this fall, and invites students of all majors to attend its inaugural meeting on Wed., Sept. 10 at 11: 15 (Common Hour) in New Academic Building, Room 428.

The team will help students improve their communication, critical thinking, and presentation skills by participating in intercollegiate competitions throughout the country. It will be led by Associate Professor of Rhetoric Tomeka Robinson, PhD, an award-winning orator and educator who joined the Lawrence Herbert School of Communication this month.

“The ability to orally communicate effectively and confidently is a skill highly valued by employers who look for what sets a person apart from a sea of other resumes,” Dr. Robinson said.  “We teach students how to stand out and be heard.”

The team’s first tournament will be on Oct. 11 and 12 at West Chester University in West Chester, PA, where they will compete against as many as 20 other universities from the East Coast.  Students will participate in 11 individual speech events in the categories of interpretation, limited preparation, and platform speeches.

Hofstra’s team is a re-launch of a program that was last active in 2008.  “When the opportunity became available to revive the program at Hofstra, I jumped at it,” said Dr. Robinson, who will serve as the primary faculty coach.  “It is my hope to reestablish the success of this program and to help our students exceed even their own expectations on both the personal and team level.”

She notes that many graduates of collegiate debate programs credit the activity with helping them “find their voices” and they carry their skills into many professional fields, including careers in the media, U.S. Supreme Court, and Congress. Notable high school and college debaters include Justices Antonin Scalia and Sonia Sotomayor, talk show host Oprah Winfrey, former U.S. Senator Russ Feingold, and South African President Nelson Mandela.

Dr. Robinson will be assisted by graduate assistant Sean Allen, who helped rebuild the speech and debate team at Wiley College in Marshall, Texas and was a 2010 national tournament champion there.  Graduate student Jaysin Spradley, an experienced competitor from Texas State University, will also volunteer with the team.   Both Allen and Spradley are first-year students in the Master of Arts program in Rhetorical Studies.

Hofstra’s team will also be involved in a number of service activities on campus and in the community.    Students who do not wish to travel and compete can still participate in the service activities and practice sessions.  Team meetings will be once a week with several private coaching sessions scheduled throughout the week.

In the Department of Rhetoric, Dr. Robinson teaches courses in group communication, oral interpretation, argumentation & debate, and health communication.  She is active in many professional and civic organizations, and was recently president of the Ohio Forensics Association.   She has also been awarded several honors for her service and excellence as an educator in the field of forensics.