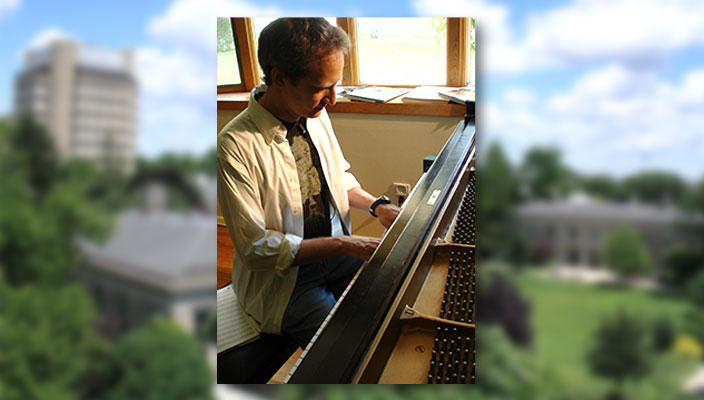 A “highlight,”“sweeping, and “stirring” are just a few of the words being used to describe the score of the new film Frontera, composed by Associate Professor of Music Ken Lampl and Darren Tate. The film, which opens today, September 5, in theaters and is also available On Demand and on iTunes, is a modern-day Western starring Ed Harris and Eva Longoria. Excerpts are available at indiewire.com, which says the music instills feelings “of big screen tales of old, but with a good sense of contemporary motifs too.” Dr. Lampl and Tate will reteam for the score for the forthcoming horror film Unnerved, starring Hofstra drama and dance alumnus Mark DiConzo ’05.

Set in the tumultuous Border area of Arizona and Mexico, Frontera follows the events that take place after a former Arizona sheriff’s wife is killed while riding on their ranch property. It initially appears that a Mexican man crossing in to the US illegally is at fault. Dr. Lampl says, “The film is quite interesting in that it is an ensemble piece about the intersection of various life paths and the issue of the pressure that the individual feels from different value systems ranging from ethnic/socio-economic predjudice to the eternal human condition.”

When asked what inspired the music, he answers, “My writing partner, Darren, and I were interested in doing a score which was basically ‘dramatic’ given the high emotional content of the plot but with a nod to the great epic westerns at the same time like Elmer Bernstein’s score to The Magnificent Seven and Morricone’s Once Upon a Time in the West.  The score consists of everything from subtle ambient electronica to big sweeping orchestral gestures.  The process was both challenging and enthralling!”

Dr. Lampl, who is coordinator of the music merchandising program, received his bachelor and master’s degrees in music composition at Rutgers University and his doctorate at Julliard. He started his professional career as a jazz musician, touring with drummer Chico Hamilton. While he was at Julliard, he was awarded a scholarship to the renowned Tanglewood Music Festival where he had the opportunity to meet and study under his childhood hero, John Williams, composer of the soundtracks to Star Wars, Superman, ET and Raiders of the Lost Ark, among other classic movies.

When asked once if he is able to recognize which of his students will succeed in the highly competitive field of music, Professor Lampl answered, “It’s all about passion and being in touch with what you love to do.” He has seen his students go onto careers at Atlantic Records, Carnegie Hall, MSG and a variety of other leaders within the industry.