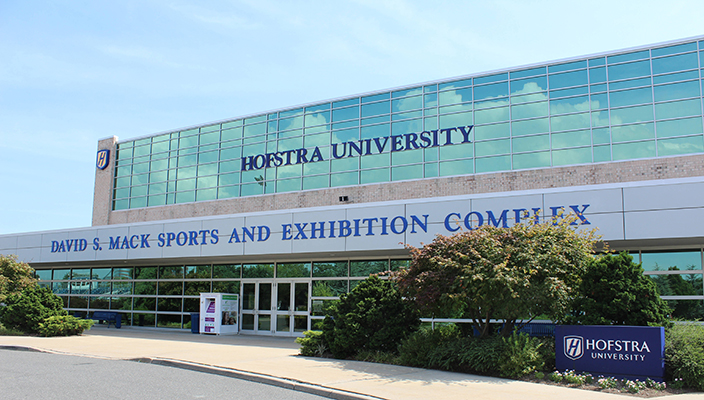 There is a great deal of excitement surrounding the upcoming Hofstra Men and Women’s Basketball seasons and that excitement also extends to changes to the David S. Mack Sports and Exhibition Complex.

The first major change, which has previously been announced, is the brand-new court design that will be seen in the Mack Sports Complex this season. This exciting change to the court has been positively received by fans of Hofstra Basketball, members of the media and particularly by the student-athletes and staffs of both programs.

When coming to games this season you will notice several other changes as well.

The most noticeable, other than the actual court, will be the switching of the team benches and scorer’s table to the south side of the court. This change will allow both Hofstra and the visiting teams easier access to their locker rooms and also create better visuals for the majority of the fans in attendance who wish to have a view of the team benches. Another change relating to the team benches for the 2014-15 Hofstra Basketball seasons will be the moving of the television camera broadcast platform from the top of the south stands to the area directly below the suites in the Mack Sports Complex. As previously announced, the Hofstra Men’s Basketball team will have a pair of nationally-televised games this season from the Mack Sports Complex and this change will allow fans viewing the game on television to have the most optimum viewing experience of the court and team benches.

As part of that change, courtside seating and press row will move to the north side of the court. For fans who are ticket holders in the courtside seating area, this change will be welcome as it will provide those fans with quick and easy access to the W.B. Mason Pride Lounge, which is located in the northeast corner of the Mack Sports Complex. In addition, this change will allow those fans with close access to the concession area located on the lower level of the Mack Sports Complex and the restrooms which are also located in the same area.

The 2014-15 season will be an exciting one for the Hofstra Men and Women’s Basketball programs and we look forward to all of our wonderful fans being part of it. Season ticket holders will be receiving their renewal forms and ordering information in the mail this week. If you have any questions in regards to season tickets, individual game tickets or changes to the seating process, please don’t hesitate to call the Hofstra Athletics Ticket Office at (516) HOF-TIXX.