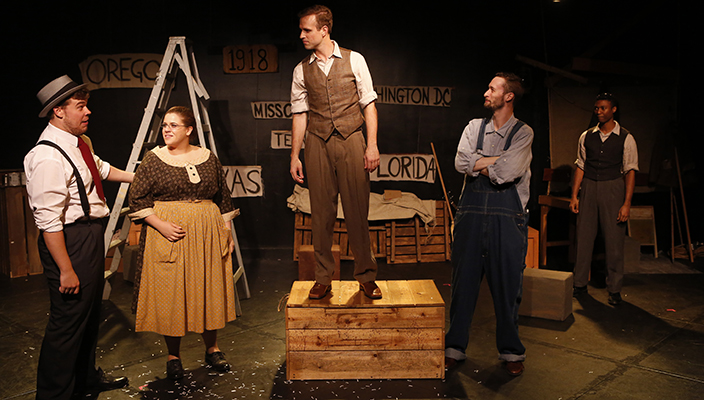 The March of the Bonus Army, a play by Isaac Rathbone ’00 with direction by Professor of Drama Cindy Rosenthal will get a New York City premiere, September 4-14, at the Black Box at Cap 21 Studio. First presented at Hofstra in 2012, this production is rich with alumni talent both on the stage and crew. The set design is by Jennifer Rathbone ’00 and Samantha Newby ’13, and the six-member cast includes recent Hofstra grads Ian Poake ’12, Christian Titus ’12, Samantha Cunha ’14 and Rita McCann ’14.

The producer, Oracle Theatre, Inc., is a not-for-profit arts organization founded in 2003 by Isaac and Jennifer Rathbone.

The play tells the true story of a group of 20,000 World War I veterans who marched on Washington, DC in 1932. They were promised compensation payments for their wartime service wages and protested to accelerate these payments while suffering through the poverty of the Great Depression. Their grassroots lobbying efforts fell on deaf ears, as the legislation to pay them their “bonus” was defeated in the Senate. The US Army, under direction of General MacArthur, forcefully evicted the Bonus Army and burned their tent city to ground. The tragedy of the Bonus March was a major event in American history and helped create future veterans benefits, such as those found in the GI Bill. The production features live music of the time period as well as historical texts and events as the foundation for the script.

The play was first presented at Hofstra as part of the “Expressions in Democracy,” programming leading up to the 2012 Presidential Debate at Hofstra between President Barack Obama and Governor Mitt Romney.

Given that 2014 marks the 100th anniversary of the beginning of World War I, this revival of The March of the Bonus Army is particularly timely.

In a Q&A published recently on Howlround.com, Professor Rosenthal asked Rathbone about the relevance of the play to modern times and ongoing struggles of our nation’s veterans. He said, “The ripple effects of World War I impacted not just international politics, but everything from race relations to art, music and literature. The Bonus Army is one of these ripples – it was one of the first times that the American public became aware of the struggles that some veterans go through when their military service is over. There was no real concept of ‘compensation’ for veterans before, and it helped pave the way for historic policy changes like the GI Bill.

“… Our society tends to shy away a bit from what happens after the soldiers come home. Our country asks these men and women and their families to sacrifice a lot. So when a war is declared ‘over,’ it’s never really over. And if our society chooses to fight in these conflicts, they must be dedicated to every single aspect of investment in peace and recovery.”

Tickets for The March of the Bonus Army may be purchased online or at the door. Visit the Oracle Theatre, Inc. for project updates.

Ken Lampl Hits All the Right Notes for New Western
Nat’l Surburban Poll: Unease and Uncertainty as Elections Near