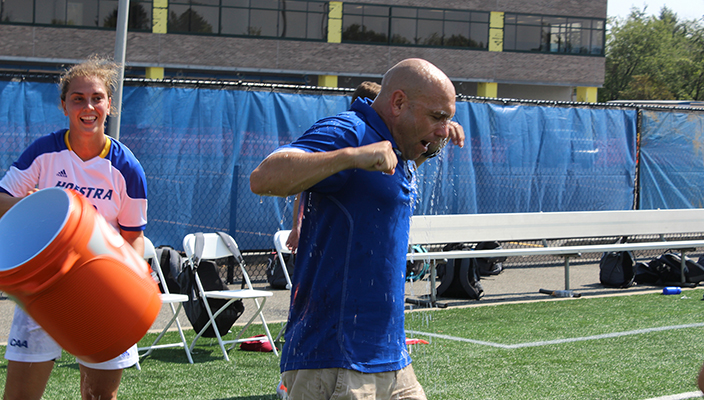 The Hofstra Women’s Soccer team scored four first-half goals for a second consecutive game as the Pride rolled past Saint Joseph’s, 5-0, in a non-conference matchup on Sunday afternoon at Hofstra Soccer Stadium.

Sophomore Friederike Mehring and freshman Jenna Borresen each played a half in goal for the combined shutout as Saint Joseph’s dropped to 1-3. The Pride defeated the Hawks for a second consecutive season.

The Pride scored four goals through the opening 32 minutes and fired the first salvo when Scolarici scored off a penalty kick in the fourth minute. Galton drew a foul just inside the box. Though no card was assessed, Hofstra was awarded the spot kick and Scolarici converted off Saint Joseph’s goalkeeper Allison Ebling for the early 1-0 lead.

Scolarici registered her eighth career multi-goal game and second in eight days. After scoring twice in the first half against Bucknell in a 4-0 victory on Aug. 24, the Aldie, Virginia native accomplished the feat again with an 86th-minute goal off a low shot from the top of the box. She has six multi-goal games since 2013.

With her two goals, Scolarici has 37 for her career, moving past Suzanne Newell for sole possession of second place on the program’s all-time goal list. She trails only Christa Eidenweil’s program record of 39 goals set from 1997-00.

Galton, the reigning Colonial Athletic Association Player of the Year, showed the skills that made her a preseason MAC Herrmann Trophy watch list honoree by setting up the opening goal and scoring Hofstra’s second goal in the 18th minute. Sophomore Jill Mulholland set up Galton on the left side, allowing the Harrogate, England product to race in and blasted a left-footed shot near the far post for her first goal of the season.

Less than two minutes later, senior Amber Stobbs scored off a redirect near the right post. The play was set up by freshman Kristin Desmond’s throw-in, with Stobbs tallying a goal for the second straight game with good placement near the goalmouth for a 3-0 lead.

Galton extended Hofstra’s lead to 4-0 before halftime by beating a defender one-on-one near the top of the box and scoring to the right post in the 32nd minute. That marked the game’s last scoring before Scolarici capped the barrage late in the contest.

Mehring made the offensive support stand up with two first-half saves before giving way to Borresen after the break. Borresen, a product of nearby East Meadow, stopped the only on-target shot she faced in the final 45 minutes to help Hofstra log a clean sheet. Ebling finished with eight saves.

Riddiough is in his ninth season as the program’s head coach and has never had a losing season. He has led Hofstra to two CAA titles as the head coach and four appearances in the league’s championship game. His career record is 100-53-13.

The Pride will next be in action in a tournament hosted by West Virginia, starting with a contest at WVU at 7 p.m. on Friday. The Pride will then face Indiana State on Sunday, Sept. 7 at noon.