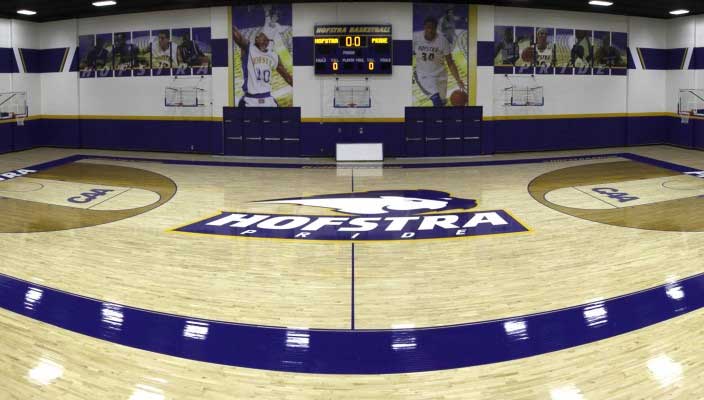 The Hofstra Men’s and Women’s Basketball teams took another step forward in the development of their programs as the Hofstra Basketball Practice Facility was completed recently and is now in full operation.

This year-round dedicated facility will allow both programs around-the-clock access as they train and develop their student-athletes to compete for Colonial Athletic Association (CAA) Championships and NCAA Tournament berths.

“What an incredible place for our team to train and develop,” stated Hofstra Head Men’s Basketball Coach Joe Mihalich. “As the wall in the new facility says ‘Championships Are Won In The Off-Season’ and the brand-new Hofstra Basketball Practice Facility will allow our program to be in position to compete for championships. I was speechless when I saw the completed facility. Thanks to all who played a role, especially the tremendous work by Hofstra President Stuart Rabinowitz and Vice President and Director of Athletics Jeff Hathaway.”

“We are thrilled to complete this project and have our basketball teams currently utilizing the new Hofstra Basketball Practice Facility,” commented Hofstra Vice President and Director of Athletics Jeffrey A. Hathaway. “I want to extend my appreciation to Hofstra President Stuart Rabinowitz for his support of this project and to the many other areas within the University that also have our thanks for bringing this facility to fruition. Our basketball student-athletes and coaches are very excited and appreciative to have such a first class facility. The practice facility will further enhance our recruiting efforts and assist in the basketball development of our current student-athletes while presenting the rich tradition of the two programs. We want our student-athletes and programs to strive for excellence in all that they undertake and that includes winning conference championships and advancing to post-season play.”

“When seeing the completed facility for first time I was elated and felt a strong sense of pride to be part of this University,” mentioned Hofstra Head Women’s Basketball Coach Krista Kilburn-Steveskey. “Our program is so thankful to the entire University for making this facility a priority. It goes without saying that the Hofstra Basketball Practice Facility puts our programs on another level in terms of recruiting and developing our student-athletes. I can’t wait to get in there and begin preparations for the upcoming season!”

Originally announced at last season’s Hofstra Basketball Media Day on October 17, 2013, the facility will give both programs an advantage over many of the universities they compete against.

The 14,000-square foot practice facility features a new court with eight baskets, a sound system, a filming system with smart TV for video, signage and graphics. The facility will also house an athletic training area that includes cardio equipment.

The design includes banners commemorating both programs retired jerseys, wall graphics recognizing the postseason appearances of each team and photos and information about the many professional athletes each squad has produced. There are also graphics celebrating the great history of both the Hofstra Men’s and Women’s Basketball programs.

The practice facility floor is an exact replica of the main floor of the Mack Sports Complex, which will be completed later this summer.