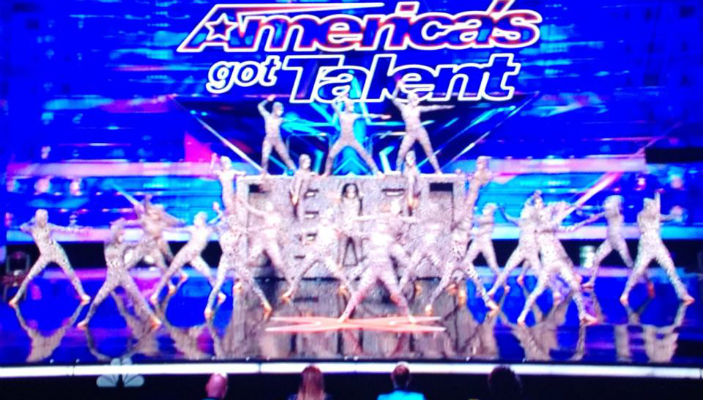 The moves of the Hart Dance Team may appear magical, but there’s no illusion about the talent of Hofstra alum Katherine Leist ’07, who trains, coaches and directs the team, which made it to the quarterfinals of NBC’s “America’s Got Talent” earlier this summer. Leist’s choreography wowed the show’s celebrity judges.

“The choreography was just on point,” said judge Mel B, formerly “Scary Spice” of the Spice Girls of one of the team’s routines. “You had my attention from start to end. It was very entertaining, and you’re all great dancers.”

For its first appearance on the show, the Santa Clarita, Calif.-based Hart Dance Team performed to a remix version of “Hide and Seek” by Imogen Heap. The dancers used a large box as a prop, into which they disappeared throughout their routine.

“I loved the production,” said judge and comedian Howie Mandel. “Not only is it well-choreographed with the box and you disappeared … it was magic, it was just a great visual.”  Judges Heidi Klum and Howard Stern also gave the team – and Leist – an overwhelming thumbs-up.

“I think it was a brilliant concept,” Stern said. “The choreography is brilliant in this box.”

Seeing her team – which comprises 26 girls between the ages of 14 and 17 – perform before live audiences on national television at Hollywood’s Dolby Theatre and New York City’s Radio Music Hall “was both nerve-racking and exciting,” said Leist, who majored in dance and minored in marketing.

“I was backstage listening when the judges were giving their feedback, and I remember I kept thinking to myself, ‘Is this real?’ Even when it aired on TV, I still couldn’t believe it!” she said. “I was so flattered to hear all of their compliments, and as a dance teacher/choreographer it made me feel like I must be doing something right!”

The Hart Dance Team won the National Championship in the Prop Division at the USA Dance Nationals in Anaheim, Calif., last March, which caught the attention of “America’s Got Talent.”

“Someone in casting at ‘America’s Got Talent’ [saw our performance on YouTube] and contacted me,” Leist said. “They showed the video to their executive producers, who loved it, and told us they had decided to send us straight through to the stage auditions in front of the judges. Normally, contestants have to go through a grueling process of several auditions before getting to that point.”

The team’s express ride did not end there. Following the audition in the Dolby Theatre, a camera crew visited the dance school in Santa Clarita to shoot some supplemental footage of the team. “We all knew a camera crew was showing up, but to our surprise, so did Mel B!,” Leist said. The celebrity judge told Leist that her team would bypass “Judgment Week” and go straight through to the live shows. “There were thousands of people who auditioned for AGT, and we were one of 48 acts to go to New York City for live shows.”

The team’s “magic box” performance earned it one of 12 spots in the quarterfinals. The dance, set to a mixed version of Lorde’s “Team” and Ellie Goulding’s “Burn,” featured the dancers in mirror-covered unitards, morphing into a jungle gym-type prop, which was also mirrored. The team was not one of the five that advanced from the quarterfinals, but Leist said the experience was invaluable.

“We are still coming down from our high on this amazing journey,” Leist said. “Up next, we plan to get back to normal. School starts up again this week, and I have a new team of girls to start training, getting ready and choreographing for, as a new competition and performance season is just around the corner.”