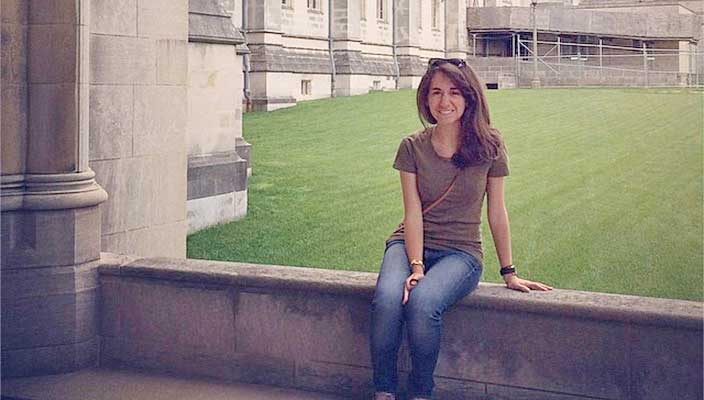 Marina R. Pino ’12 is no stranger to the halls of the U.S. Supreme Court. Earlier this summer, she was hired as Aide to Chambers for Justice Elena Kagan – the third position she has held at the Court in less than two years.

“Learning from the various officers and offices of the Court has been a thrilling experience, and one that I am so fortunate to have right after graduating from Hofstra,” Pino said.

In her new role, Pino will work with all members of Justice Kagan’s chambers, including her two secretaries and four law clerks. She will assist in the preparation work for oral arguments and the Justices’ Conference, which is the session after oral arguments when the Justices decide the case.

Pino, a student in Hofstra University Honors College, majored in history  and minored in political science. She cut her teeth at the nation’s highest court as a Clerk’s Office intern during her final semester at Hofstra in the fall of 2012. As an intern, she was primarily involved in the beginning stages of a case, specifically its submission to the Court and its filing for Conference. Her duties included organizing and preparing incoming cases before submission to case analysts, and assisting petitioners and respondents with filing their documents to the Court.

Shortly after graduation, Pino was hired as a Marshal’s Aide to Supreme Court Marshal Pamela Talkin for a two-year term. In this role, she moved from working on the beginning of cases to the end, reviewing and editing transcripts of oral arguments before their publication.

Pino was one of 11 aides to the Marshal, each of whom was assigned to a different office when not working for the Marshal or the Marshal’s Office in general. She also worked in Justice Sonia Sotomayor’s chambers, where she performed administrative tasks once or twice a week.

Then she was scooped up by Justice Kagan’s chambers.

“[I] still had another eight months left on my previous contract, but immediately jumped on this opportunity seeing that I could further advance at the Court since my days as an intern in the Clerk’s Office,” Pino said.
Working at the Court is helping Pino map out her post-graduate plans, which may include graduate or law school. “Each position so far has exposed me to different aspects of the law, which is something that is invaluable as I weigh the pros and cons of pursuing a law or social science degree,” she said.

Pino used pieces of her undergraduate thesis, which she worked on under the direction of Hofstra History Professor Simon Doubleday, as a writing sample during the interview process with Justice Kagan’s office.

Her thesis studies John Mandeville’s Travels, a fourteenth-century travelogue, whose author claims to have traveled immense distances across the Middle East and Asia. His book, which contains a great deal of fantasy and imagination, was widely regarded as an authoritative source by later generations of European scholars and travelers, among them Christopher Columbus. Pino argues that his description of Islamic and Asian cultures was designed as a form of cultural critique, at a time when Europe was immersed in a period of rapid change and profound instability.

Justice Kagan, who was also a history major as an undergrad, “was very interested in my thesis,” Pino said.

“I still look back on my defense day in May 2012 as one of my proudest moments,” she said. That’s saying a lot, given her daily interactions in our nation’s highest court.

Featured Image: Marina Pino relaxes in front of the National Cathedral during time away from chambers.